Predictions of rain during the course of the much-awaited India-Pakistan match on Sunday is keeping everyone on the edge. Prayers have started and fingers are crossed as this is not just any other match. 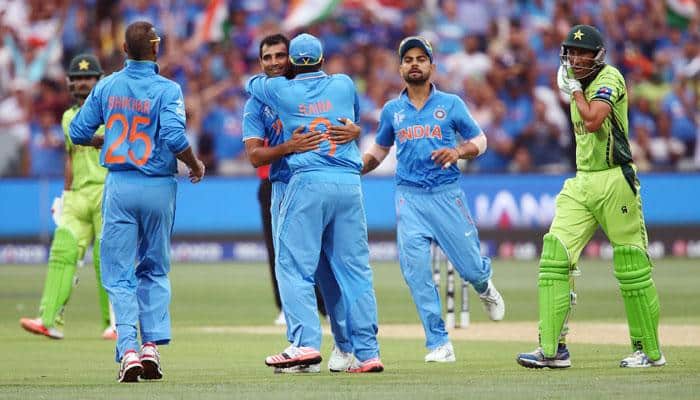 Manchester: Predictions of rain during the course of the much-awaited India-Pakistan match on Sunday is keeping everyone on the edge. Prayers have started and fingers are crossed as this is not just any other match.

It has been raining cats and dogs in this part of the world for the last few weeks, resulting in as many as four games yielding no result due to inclement weather. In fact, there was light rain even on Saturday and the outfield has already taken a beating thanks to the lack of adequate covers.

According to weather reports, it could start raining from noon and continue till sunset, which is around 8.30 p.m.- 9 p.m. But chances are not that high, say the weathermen.

This has already become the wettest World Cup since 1975 when the first such tournament was played.

At least 10 of the next 29 matches have more than 60 per cent chances of rain while six others have more than 50 per cent probability of rain, says Accuweather.com, a commercial weather forecasting service provider.

India and Pakistan will be meeting for the seventh time in a World Cup on Sunday. On all the six previous occasions, the Men in Blue have turned victorious.

The ICC has said in a statement that it will be a logistical mayhem to keep reserve days for games in the group stage.

"Factoring in a reserve day for every match at the World Cup would significantly increase the length of the tournament and practically would be extremely complex to deliver," ICC Chief Executive David Richardson had said in a statement a few days back.

"It would impact pitch preparation, team recovery and travel days, accommodation and venue availability, tournament staffing, volunteer and match officials' availability, broadcast logistics and very importantly, the spectators who in some instances travel hours to be at the game. There is also no guarantee that the reserve day would be free from rain either.

"Up to 1,200 people are on site to deliver a match and everything associated with it, including getting it broadcast, and a proportion of them are moving around the country. So reserve days in the group stages would require a significant uplift in the number of staff," he added.

But if the much-anticipated clash between India and Pakistan is affected by rain, the international body will have a tough task at hand answering critics.

After all, fans not just in England, but from across the world have arrived in Manchester for the Battle Royale.