Ranji Trophy: Delhi on back foot against Kerala

Delhi openers Anuj Rawat was batting on 9 while Kunal Chandela was yet to open his account. Earlier, Kerala added 2249 runs to their overnight score of 276 runs as Robin Uthappa (102), skipper Sachin Baby (155), Ponnam Rahul (97) and Salman Nizar (77) were the main contributors. 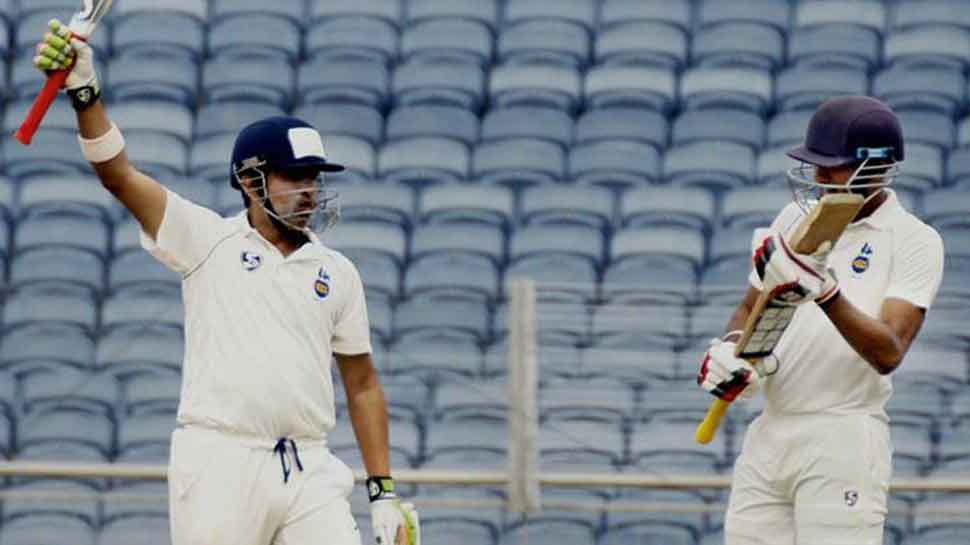 New Delhi: Kerala started Day 2 of the ongoing Ranji Trophy from where they ended and put up a massive 525/9(d) in their first innings against Delhi, who were 515 runs behind when stumps were drawn for the day.

Delhi openers Anuj Rawat was batting on 9 while Kunal Chandela was yet to open his account. Earlier, Kerala added 2249 runs to their overnight score of 276 runs as Robin Uthappa (102), skipper Sachin Baby (155), Ponnam Rahul (97) and Salman Nizar (77) were the main contributors. For Delhi, Tejas Baroka bagged three wickets while Shivam Sharma and Lalit Yadav settled with two each.

Gujarat took a meagre 62-run lead as they were at 295/9 in reply to Hyderabad`s 233 at the end of the day. Manprit Juneja and Rujul Bhatt were the top scorers for the visitors with scores of 94 and 65 runs respectively. Hosts Hyderabad`s Mehdi Hassan was the pick of the bowlers with figures of 4/78 while Mohammed Siraj picked three for 73 runs.

Hosts Rajasthan could only manage to add a run to their overnight score as they were bundled out for 257 runs by Punjab. In reply, skipper Mandeep Singh`s unbeaten 106 and Gurkeerat Singh Mann`s 68 propelled Punjab to 247/5 and they are now just 10 runs behind. S.K. Sharma picked three for 67 runs for Rajasthan.

Resuming at 26/0, Vidarbha added 242 runs on the second day, thanks to Ganesh Satish`s unbeaten 113 and Mohit Kale`s 82. Vidarbha has now a 57-run lead with six wickets in hand. Earlier, they had wrapped up Andhra at just 211 runs on the first day itself.

The contest between Saurashtra and Himachal Pradesh seemed to be ending shortly as the former are just 66 runs from victory with seven wickets in hand and two days of play still left.

A collective batting effort guided Karnataka to a moderate 336 runs in their first innings against Tamil Nadu, who were 165/4 when stumps were drawn. Dinesh Karthik and N Jagadeesan were batting at 23 and 6 runs respectively at the close of play.

After putting just 253 runs in their first innings, Railways bounced back in fashion, thanks to their bowlers -- Amit Mishra (4/52) and Himanshu Sangwan (4/71) as they bundled out Uttar Pradesh for 175 runs. However, Railways were again reeling at 58-5 in their second innings but have set up a 136-run lead.

Mumbai rode an-round batting show as they managed to put a decent 431 runs in their first innings before being all out against Baroda. In reply, unbeaten Kedar Devdhar`s 154 run helped Baroda reach 301 runs but the hosts have lost nine wickets during the day and now trail by 130 runs.

Jharkhand was on the back foot against hosts Tripura, who managed 289 runs in their first innings but also wrapped up the visitors for a paltry 136 runs, setting up a healthy 153-run lead. Being asked to follow-on, Jharkhand were at 91/2 and still trail by 62 runs.

In Dehradun, Uttarakhand was bundled out for 84 runs in reply to Jammu and Kashmir`s 182 runs. J&K showed some improvement in their second innings as they put 304 runs before the entire team was again sent back. The hosts, however, seemed to have learnt nothing as they were again at 18/3 and need a massive 385 runs to avoid defeat.

In reply to Haryana`s 401 runs, Maharashtra was trailing by 313 runs as the visitors were at 88/4 when the second day ended.

Odisha was all out for 215 runs against hosts Chattisgarh`s 134 runs. Later, the hosts ended the second day at 45/1 in their second innings and trail by 36 runs with nine wickets in hand.

Coming to the Plate Group matches, after putting 285 runs in their first innings, Meghalaya bowlers stepped in as they wrapped up Nagaland at just 136 runs in the day. Nagaland`s Imliwati Lemtur replied back in a similar fashion as he scalped six wickets conceding just 32 runs as Meghalaya could manage only 89 runs in their second innings losing nine wickets. However, Meghalaya has taken a healthy 238-run lead.

Manipur managed 289 runs in reply to Mizoram`s paltry 65 runs but the latter showed some fight in their second innings as they somehow posted 290 runs before being all out. Manipur now needs just 66 runs to taste a victory with a couple of day in their hand.

Goa declared their innings at 436/6, as they took a massive 300-run lead against Sikkim, who had posted 136 in their first innings. Later, Sikkim were at 22/2, trailing by 278 runs when the day closed.

Arslan Khan`s unbeaten 233-run knock followed by Shivam Bhambri`s 105 and skipper Manan Vohra`s 124 powered Chandigarh to 503/2(d) as they took a huge 356-run lead against Arunachal Pradesh. It was the same tale for the visitors in their second innings as well as they were at 164/6, trailing 192 runs and on course of their defeat.

Puducherry added 238 runs to their overnight score before being wiped out at 300 runs against Bihar`s 173. In their second innings, hosts Bihar were 61/4 and trail by 66 runs.