Saurashtra are all set to clinch their maiden title at Ranji Trophy after taking a first-innings lead against Bengal on the fifth day of the final clash at the Saurashtra Cricket Association Stadium on Friday. 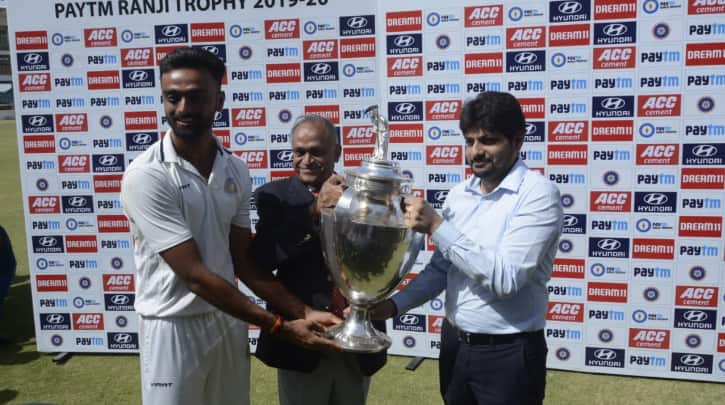 Saurashtra lifted their maiden title at Ranji Trophy on the basis of the first-innings lead against Bengal on the fifth day of the final clash at the Saurashtra Cricket Association Stadium on Friday.

According to the rules of the tournament, if the summit showdown is heading towards the draw, then whoever manages to take a first-innings lead is declared as winner.

Earlier in the day, Bengal resumed their first-innings on 354 for six--with Anustup Majumdar and Arnab Nandi batting at the crease at their respective scores of 58 and 38.

However, Bengal lost their remaining four wickets inside 27 runs to get eventually bundled out for 381.

Meanwhile, Chetan Sakariya and Chirag Jani also chipped in with a wicket.

After bundling out Bengal, Saurashtra skipper Unadkat ran around the stadium to celebrate their victory.

Subsequently, Saurashtra reached 105/4 in their second innings against before the match ended in a draw to hand the Jaydev Unadkat-led side their maiden win. Avi Barot was the highest scorer with 39 runs.

Earlier, Saurashtra posted a score of 425 in their first innings. Arpit Vasavada was the highest scorer with 106 runs while Cheteshwar Pujara (66), Vishvaraj Jadeja (54) and Barot (54) also made significant contributions.

Australia vs New Zealand ODI series to be played without spectators