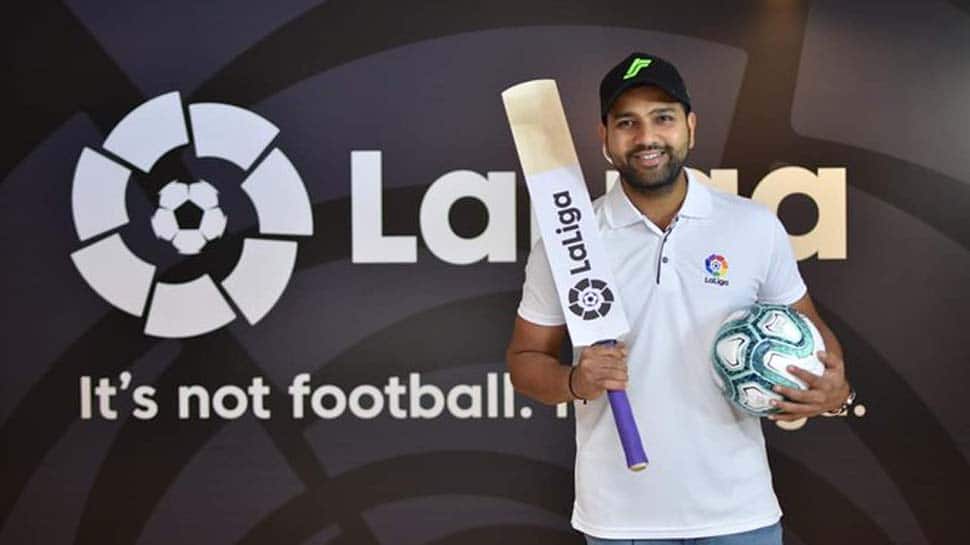 Taking to its official Twitter handle, La Liga shared a picture of the 32-year-old opener with bat and football and welcomed him on board as its brand ambassador of India.

As a result, Rohit became the first non-footballer personality in the history of La Liga to have joined hands with the league. The development comes in the wake of a series of initiatives taken by La Liga in India since 2017.

Reflecting on the same, Jose Antonio Cachaza, Managing Director, LaLiga India said that the country has a huge appetite for football and the Indian opener is a perfect choice for the position considering the fact that he is one of the most renowned faces in Indian cricket at the moment and an ardent football fan.

“India is a very important market for LaLiga from a global perspective, we came here in 2017 to get a better understanding of the pulse of the nation. Over the past two years, and after several ground-breaking initiatives, it is obvious that India has a huge appetite for football. Rohit Sharma is the perfect example of this, inspite of being the most renowned face in Indian cricket right now, he is also an ardent football and LaLiga fan. In his persona on and off the field, Rohit embodies the LaLiga standards and principles. We are elated to have him as LaLiga’s first ever non-footballer brand ambassador and as the face of our brand in India," the La Liga official website quoted Cachaza as saying.

Meanwhile, Rohit stressed that football has always held a special place in his heart and, therefore, he is humbled to have been named the ambassador of the La Liga.

"Hola India/España, as you guys know, football has always held a special place in my heart so this association is so special to me. And to be named the ambassador for the La Liga is so humbling. So excited for this partnership @LaLigaEN," he tweeted.

Hola India/España, as you guys know, football has always held a special place in my heart so this association is so special to me. And to be named the ambassador for the La Liga is so humbling. So excited for this partnership @LaLigaEN pic.twitter.com/prZFFSeHdV

Rohit, who is currently ranked No.2 in the ICC ODI rankings for batsmen, recently became the first batsman from the country to hit 400 international sixes during the third and final T20I of the three-match series against West Indies at the Wankhede Stadium in Mumbai on Wednesday.

By achieving the landmark in his 354th international match across formats, Rohit also became the fastest batsman to reach the mark. Though West Indies swashbuckling batsman Chris Gayle (534) and former Pakistan skipper Shahid Afridi (476) have more sixes in international cricket than Rohit Sharma, the duo had taken more matches than the Indian to hit 400 maximums.

Rohit eventually finished that innings at 71. The knock also saw the Indian opener finish the year as highest run-getter in T20Is along with Virat Kohli with a total of 2,633 runs.