Sharma eventually finished the day with a blsitering knock of 115 off 174 balls, including 12 boundaries and five sixes. 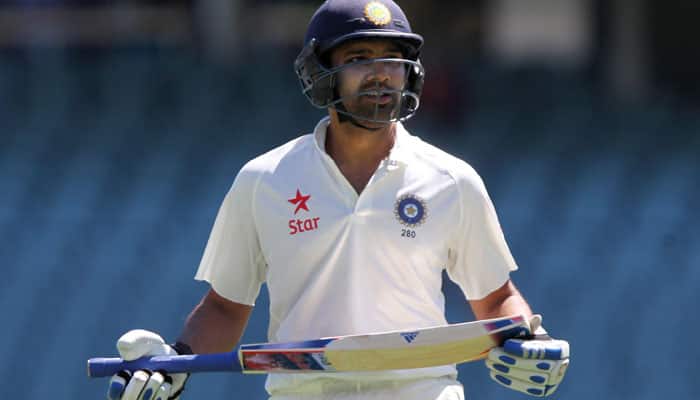 Indian batsman Rohit Sharma on Wednesday became the first player from the country to score a century in all three formats of the game as an opener when he smashed an unbeaten knock during the first Test of the three-match series against South Africa at the ACA-VDCA Stadium in Visakhapatnam.

Sharma,who fell for a duck during the practice game for Board President’s XI against South Africa, had a dream debut in his first Test as the opener on the day one of the opening match against the Faf du Plessis-led side.

The 32-year-old first pulled back his 11th Test half-century before notching up his fourth hundred in the longest format of the game off 154 balls. He reached the three-figure mark with two runs on the last delivery of the 54th over by Senuran Muthusamy.

Besides a ton, Sharma also stitched a huge 202-run partnership with Mayank Agarwal, who also remained unbeaten at 84 before rain played the spoilsport and forced early stumps on Day 1.

Sharma eventually finished the day with a blsitering knock of 115 off 174 balls, including 12 boundaries and five sixes.

Besides this, Sharma also became the fourth batsman from the country after Shikhar Dhawan (187 vs Australia in Mohali, 2013), KL Rahul (110 vs Australia, Sydney, 2015) and Prithvi Shaw (134 v West Indies, Rajkot, 2018) to score a century while opening the innings for the first time in Tests.

Earlier, Sharma became the second Indian batsman after former Indian skipper Rahul Dravid to notch up six straight fifty-plus scores on home soil. He had earlier smashed three half-centuries against Sri Lanka and two against New Zealand at home in 2017.