India captain Rohit Shama was all praise for his bowlers following the team's easy six-wicket win against Bangladesh in the Nidahas T20I tri-series at Colombo on Thursday. 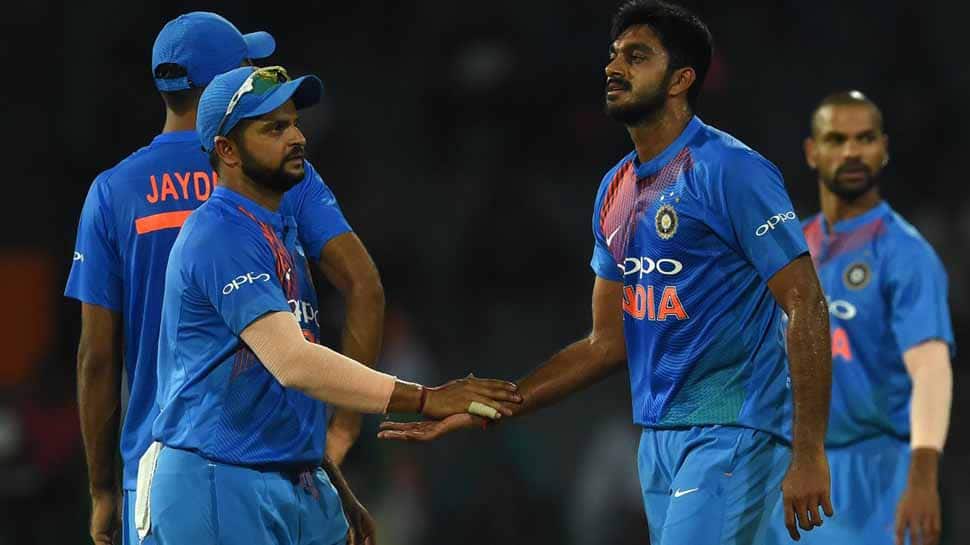 India captain Rohit Shama was all praise for his bowlers following the team's easy six-wicket win against Bangladesh in the Nidahas T20I tri-series at Colombo on Thursday.

India came into the match after a crushing defeat in their previous encounter to hosts Sri Lanka where Kusal Perera smashed 66 off 37 balls, including 27 runs from a Shardul Thakur over, to help the island nation chase down 175 with nine balls to spare.

The Indian bowlers, however, quickly moved on from that thrashing and on Thursday restricted the Tigers to a mediocre total on what appeared a batting friendly wicket. Led by Jaydev Unadkat's 3/38 and Man-of-the-Match Vijay Shankar's 2/32, the bowling unit didn't take long to tame the Bangladeshi batsmen and eventually restricted them to 139/8.

The fact that the Bangladeshis played 57 dot balls went a long way towards tilting the match in India's favour.

And so, it was no surprise when Rohit waxed lyrical about the bowlers' effort at the post-match presentation. "It was a great performance - something that was expected from us.

"Till the last ball of the game was bowled, it was clinical. We looked into what went wrong against Sri Lanka and we thought hitting back of a length was a good option.

"We wanted them to go after the long boundaries. I thought the bowlers executed their plans really well. Came out and did what was asked. We kept it simple," Rohit, captaining the team in the absence of Virat Kohli, said after India chased down 140 in 18.4 overs with six wickets in hand, thanks largely to Shikhar Dhawan's 55 off 43 balls.

Shankar, who took his first international wickets in this match, meanwhile was pleased to do well in what was only his second game in India colours. "I've been looking forward to this.  I have been working very hard and really happy to be winning this. I've been working hard on my bowling over the last few years and bowling is something that has given me something extra in my game. Playing with this team is a dream and everyone in the dressing room is very supportive," the 27-year-old Tamil Nadu allrounder enthused.