Buoyed by the ICC ODI Player of 2019 award, Rohit Sharma averred that he was confident of carrying his superlative form in 2020 too. Virat Kohli had appealed to the crowd to stop booing Steve Smith, who had returned to cricket after serving a one-year suspension for tampering with the ball, and asked them to cheer the Australian player. 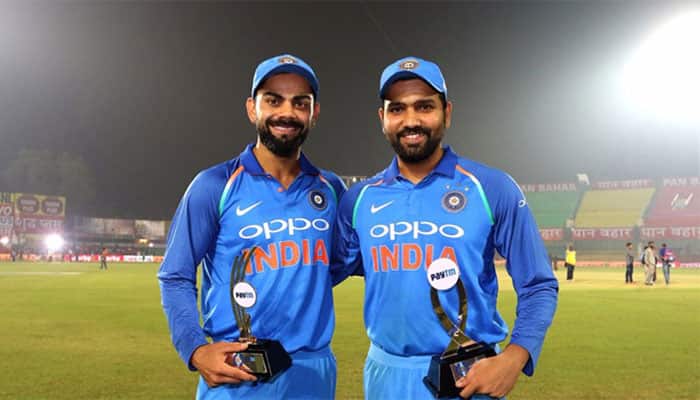 Indian batting maestro Rohit Sharma is the International Cricket Council (ICC) One Day International player of 2019 while captain Virat Kohli won "Spirit of Cricket" award for ICC Men’s Cricket World Cup 2019 for supporting Australian Steve Smith during the India-Australia match at the quadrennial event in England. Kohli is also the captain of both the ICC Test and ODI teams of 2019 while Rohit is a member of the ICC ODI Team of 2019.

Another Indian player, Deepak Chahar, won the T20 International Performance of 2019 for taking six Bangladeshi wickets including a hat-trick, giving away just seven runs in Nagpur on November 10. Chahar is also the only Indian male cricketer to register a hat-trick in a T20I.

Buoyed by the ICC ODI Player of 2019 award, Rohit averred that he was confident of carrying his superlative form in 2020 too. Rohit had scored 1409 runs in 28 ODIs with seven hundreds in 2019. "I would like to thank the ICC for giving me this award and the BCCI (Board of Control for Cricket in India) for giving me the opportunity to represent the country. It is great to be recognised in this fashion. We are very happy with the way we performed as a team in 2019. We could have done better but we have a lot of positives and a lot to look forward to in 2020," reasoned Rohit, also called Hitman by his fans for his ability to smother even the best bowlers with great ease.

Kohli had appealed to the crowd to stop booing Smith, who had returned to cricket after serving a one-year suspension for tampering with the ball, and asked them to cheer the Australian player.

Surprised with the Spirit of Cricket Award, Kohli explained why he stood with Smith. "I'm surprised that I have got it, after many years of being under the scanner for the wrong things. It is part of camaraderie that sportsmen must have with each other. That moment was purely understanding an individual’s situation. I don’t think a guy who is coming out of a situation like that needs to be taken advantage of. You can sledge, can have have banter on the field, you say things to the opposition in wanting to beat them. But booing someone is not in the spirit of any sport, I don’t endorse it," the Indian master blaster explained.

He added, "Also, that should not be a representation of our fans and what we stand as a cricketing nation, a sporting nation. We need to all take responsibility towards that. Intimidate the opposition, definitely try and have an upper hand but in a matter that is not targeting someone emotionally. That is not acceptable at any level and people should be wary of that."

Chahar, who made his T20I debut for India against England on July 8, 2018, said "I am very happy to receive this award. I would like to thank the ICC for this award and to the BCCI for giving me a chance to represent my country. That performance was very special for me. I got an opportunity to play for India after a long time. Taking six wickets conceding only seven runs was a dream performance for me and will always remain close to my heart."

While Mayank Agarwal and Kohli are the only players from India in the ICC Test Team of 2019, the ODI Team of the Year includes Rohit, Mohammed Shami, Kuldeep Yadav and the Indian captain.