Scotland will now join fellow regional qualifiers Canada, Japan, Nigeria and UAE at the 16-team event that takes place in South Africa in January and February 2020. 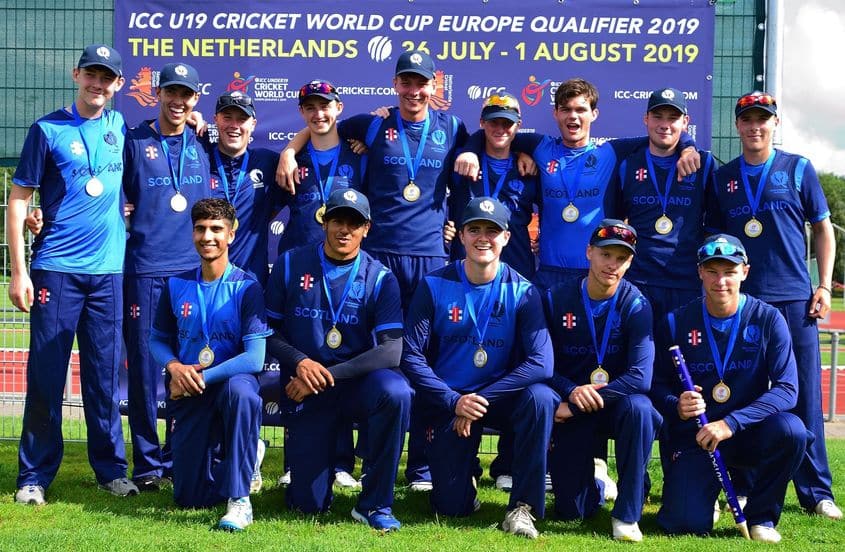 Scotland bounced back from a nervy start to register a crushing 142-run victory over Denmark in their final game of the International Cricket Council (ICC) U-19 Cricket World Cup Europe Qualifier and earn their spot at the 16-team global event in South Africa in 2020.

The final round of matches at the ICC Under-19 Cricket World Cup Europe Qualifier 2019 got under way with varying conditions across the three venues following heavy rain during the night.

Scotland arrived at Voorburg Cricket Club knowing that a win against Denmark would secure them qualification to the ICC U19 Cricket World Cup 2020, which is slated to take place from January 17 to February 9 in South Africa.

With showers threatening to play a part, Scotland captain Angus Guy won the toss and chose to bat, sticking to the game plan that has proven so effective over the past week.

However, a wicket on the second ball of the innings, followed by some incredibly economical bowling from the Danish opening bowlers, left Scotland in a daze at 19/3 after 14 overs. Shakeel Zeb (3-36 off 10 overs) and Lucky Ali (1-13 off 10 overs including 5 maidens) were the pick of the bowlers for the Danes. The match turned when Davidson (72) and Shah (90*) combined for a 152-run 4th wicket stand, pushing Scotland’s score to 171 with 10 overs remaining. Shah continued to score runs as wickets fell around him, and Scotland eventually finished on a comfortable 230/7, much to the relief of their travelling contingent of parents and fans.

In the chase, Denmark found themselves two wickets down within the first two overs. Wickets continued to fall at regular intervals, and, with only three batters posting double figures, Denmark never looked likely to reach the required 231 runs. A five-wicket haul for Jamie Cairns (5-15 off 7.5 overs) capped off another fantastic performance for the Scots, and a fifth win from five games means Scotland will not only make a top-place finish in the tournament but also travel to South Africa in 2020 to take the final spot at the ICC U19 Cricket World Cup.

Captain Angus Guy picked out the contributions of the whole squad as his favourite part of the week. “The best thing from the tournament for me would have to be that all the players contributed, obviously there were stand out performances but everyone contributed at some point or other," he said.

One of those stand out performances came from Player of the Tournament Tomas Mackintosh, top-scoring with 331 runs from his 5 innings, as well as taking 5 catches and 5 stumpings with the gloves.

Tomas said, “This win means a lot, not just to the team but the coaches and everyone involved because we’ve worked so hard collectively for a long time and for us to qualify shows just how far Cricket Scotland has come over the past few years”.

Meanwhile, Netherlands and Jersey arrived to a very wet VRA following the inclement weather in Amstelveen. The ground staff at VRA worked tirelessly throughout the morning to improve the condition of the pitch and play eventually got underway following an early lunch, with the game reduced to 31 overs each.

Having won the toss, Netherlands began steadily, despite the loss of Dutt (4 run) in the third over. However, a mix up between the wickets lead to the removal of dangerman Vikram Singh (28 runs), and Jersey took a further 5 wickets for just 19 runs to remove most of the middle order. A final wicket stand of 33 from van der Geest (28*) and Klein (19*) took Netherlands to 125/9 from their 31 over allocation. The Dutch wickets were shared out amongst the Jersey attack with all five bowlers picking up a wicket; Carnegie (2-20 off 6 overs) and Tribe (2-17 off 6 overs) the pick of the bunch.

Netherlands started well with the ball, Boissevain removing opener Gouge for a duck in the second over. However, player of the match Josh Lawrenson (56*) came in at three to deliver two match winning partnerships, first with Carlyon (28 runs) and then with Tribe (37*). Eventually, Jersey surpassed the Dutch total with 28 balls to spare, registering an eight-wicket victory and securing third place in the competition.

At Excelsior ’20, Ireland were aware that only a convincing win would be enough to take the top-spot on net run rate, should Scotland falter in their match against Denmark. With France winning the delayed toss and choosing to bat, Ireland set about removing them as quickly as possible. A stubborn French batting performance saw them score runs at a slow pace, despite wickets falling in bunches throughout the morning. Iftikhar (34* including 3x4 and 1x6) was the top scorer for the French, timing his strokes well against a strong Irish attack. Mitchell Thompson (5-17 off 9.4 overs) proved the catalyst for Ireland, removing the lower order in quick succession to have France all out for 75 within 29 overs.

With just a 10-minute turnaround between innings, Ireland made their intent to chase down the total as quickly as possible clear from the first ball, as Nathan McGuire (24 runs) hit a huge six followed by a boundary four. This gung-ho approach was not without danger, and Ireland found themselves losing regular wickets with Amjad (2-26 off 3.2 overs) and Ahmad (2-9 off 1 over) sharing the spoils for the French. Eventually, Ireland found themselves surpassing the French total in the 9th over to make a second place finish in the competition with four wins from five matches.

Scotland will now join fellow regional qualifiers Canada, Japan, Nigeria and UAE at the 16-team event that takes place in South Africa in January and February 2020.