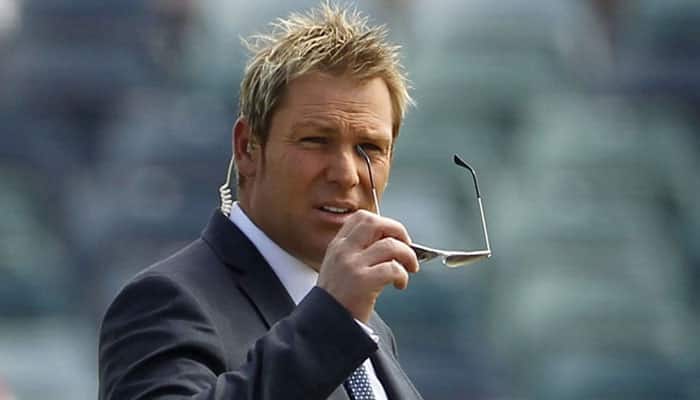 The 50-year-old's wish to see the two sides playing underlights came after India agreed to play their first-ever day-night match against Bangladesh at Eden Gardens in Kolkata--which began on November 22.

Taking to his official Twitter handle, Warne congratulated Board of Control for Cricket in India (BCCI) newly-appointed president Sourav Ganguly and Indian skipper Virat Kohli on the historic occassion.

"Congrats to you and @imVkohli on agreeing to play a day / night test. I hope there’s another one next summer in Adelaide when India tour Australia on @FoxCricket - Would be amazing buddy !" Warne tweeted.

Congrats to you and @imVkohli on agreeing to play a day / night test. I hope there’s another one next summer in Adelaide when India tour Australia on @FoxCricket - Would be amazing buddy ! https://t.co/gNY95A3MU2

Well done Sourav .. look forward to a couple in Aussie next winter  https://t.co/MgJxCanKgD

On Friday, top-ranked India became the ninth country to play under lights in the longest format of the game since Australia and New Zealand played the first-ever pink ball match.

Resuming at an overnight score of 174/3 on Saturday, Kohli (136) not only smashed his 27th Test century but also stitched a crucial 99-run partnership with Ajinkya Rahane (51) for the fourth wicket before India declared their first innings at 347 for nine to take a comfortable lead of 241 runs against Bangladesh.

On the opening day of India's first-ever pink ball Test on Friday, the hosts bundled out Bangladesh cheaply for 106 runs after being asked to bowl first.  Opener Shadman Islam was the highest scorer for the visitors with 29 runs.

Ishant Sharma was the pick of the bowlers as he bagged five-wicket haul while conceding just 22 runs. Meanwhile, Umesh Yadav and Mohammad Shami finished with three and two wickets, respectively.

In reply, Kohli and first drop Cheteshwar Pujara (55) stitched a crucial 94-run knock for the third wicket to help India take the top honours on the opening day of their first-ever match underlights on Friday.