T20 World Cup 2021: Harshal Patel and Venkatesh Iyer to stay back in UAE after IPL 2021 as cover for Hardik Pandya?

Team India will open their T20 World Cup campaign against arch-rivals Pakistan on October 24 but are currently fretting over the fitness of Mumbai Indians all-rounder Hardik Pandya. The all-rounder didn’t bowl a single delivery in the IPL 2021 and is yet to resume bowling after his recovery from injury. 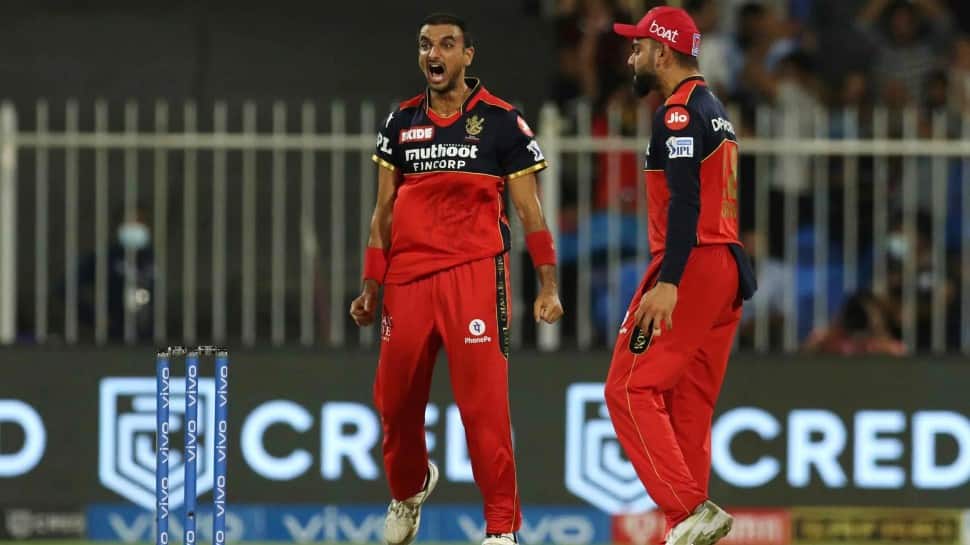 RCB's Harshal Patel celebrates after picking up a wicket against KKR in the IPL 2021 Eliminator. (Photo: ANI)
Share:
Written By:

Royal Challengers Bangalore all-rounder Harshal Patel and Kolkata Knight Riders all-rounder Venkatesh Iyer have enjoyed a phenomenal time in the UAE during the ongoing IPL 2021. Harshal is the current Purple Cap holder with a record 32 wickets in 15 games, although his campaign came to an end with RCB’s loss in IPL 2021 Eliminator to KKR. However, according to some reports Harshal, along with Iyer and KKR paceman Shivam Mavi might be asked to stay back in UAE once the IPL 2021 ends on Friday (October 15) as cover for Team India, who might be forced to make a few changes for the T20 World Cup 2021.

Team India will open their T20 World Cup campaign against arch-rivals Pakistan on October 24 but are currently fretting over the fitness of Mumbai Indians all-rounder Hardik Pandya. The all-rounder didn’t bowl a single delivery in the IPL 2021 and is yet to resume bowling after his recovery from injury.

Sunrisers Hyderbad paceman Umran Malik has already been named as net bowler after an impressive stint in the IPL 2021 this year. A Cricbuzz states that at least two out of Harshal, Iyer and Mavi can be expected to be asked to stay back in Dubai, where the Indian players are quarantining currently ahead of the tournament. “The instructions will be relayed after Monday’s Eliminator so that the player(s) will not exit the bubble and instead transfer from one bubble to another,” the report read.

The Super12 teams, which included Virat Kohli’s Indian side, have time until October 15 to finalize their squads for the T20 World Cup. “Teams can change their teams seven days prior to the start of their support period. India’s support period starts with the Super 12 which begin on Oct 23. So, they have time to change the team till Oct 15 midnight,” a Board of Control for Cricket in India (BCCI) source was quoted as saying by TOI.

“It’s not decided if Hardik will be dropped altogether if he doesn’t get bowling ready. But he is running out of time as an allrounder. If any one of Thakur and Deepak gets in, then there’s a chance of the selectors asking Harshal Patel to stay back in UAE,” the BCCI source added.

“The selectors will wait and watch on how Hardik shapes up in the next few days. The selectors went with just three genuine pacers because it was believed Hardik would be fit enough to bowl his quota of overs. Since he hasn’t bowled at all in the IPL, there’s no form to go by.”