More than three months after the game was distrupted due to coronavirus, the international cricket is all set to resume with Test series against the Caribbean side starting from July 8. 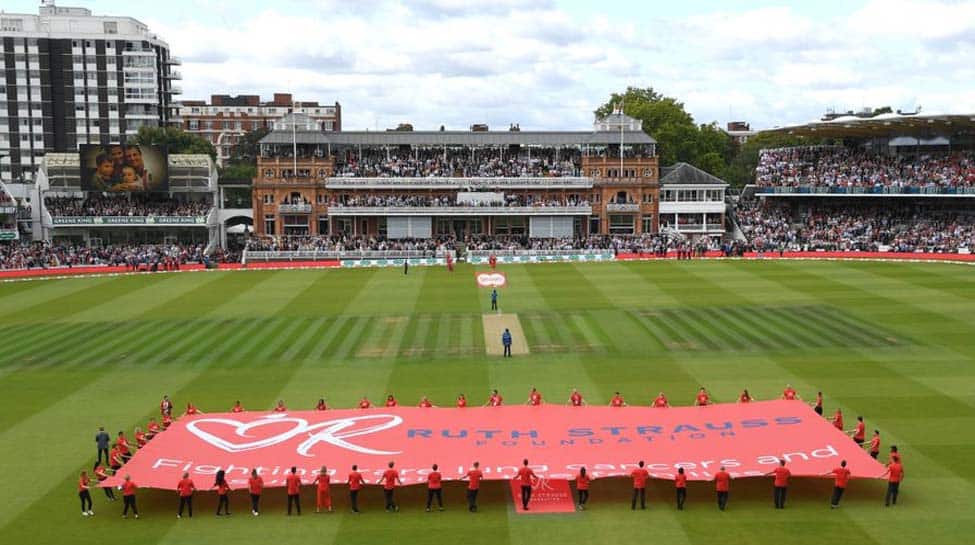 The England and Wales Cricket Board (ECB) has announced that the third Test of the three-match series between the national side and West Indies will be named as 'The Ruth Strauss Foundation Test'.

More than three months after the game was distrupted due to coronavirus, the international cricket is all set to resume with Test series against the Caribbean side starting from July 8.

The second day of the third Test will once again turn red for #RedforRuth Day, which is celebrated to raise funds for Ruth Strauss Foundation which was launched by former Sir Andrew Strauss in memory of his late wife Ruth.

Additionaly, the cricket fans will also be encouraged to don red on the second day of the match in order to showcase their support to the foundation while viewing the match from their respective homes.

On the #RedforRuth Day, the England cricketers will wear Ruth Strauss Foundation branded Test shirts as well as red-coloured caps. Meanwhile, the branding around the stadium, stumps and boundary boards will also go red.

Notably, this will be the second straight year that cricket will go #RedforRuth, the ECB official website said

In 2019, the Lord’s Cricket Ground turned red during the second Ashes Test between England and Australia as approximately 28,500 spectators supported the charity to help the foundation raise upto over £550,000.

Ruth Strauss, the wife of former cricketer and England's director of cricket Andrew Strauss, had passed away following a long battle with cancer. She was 46 at the time of her death.

Sir Andrew launched the Ruth Strauss Foundation in his wife's memory with an aim to provide professional and emotional support to the families to prepare for the death of a parent from cancer and drive the need for more research & collaboration in the fight against non-smoking lung cancers.