Thrust into the starting line-up as a replacement for the injured Shikhar Dhawan in Manchester, Shankar enjoyed a World Cup debut to remember, taking two vital wickets and making 15 not out. 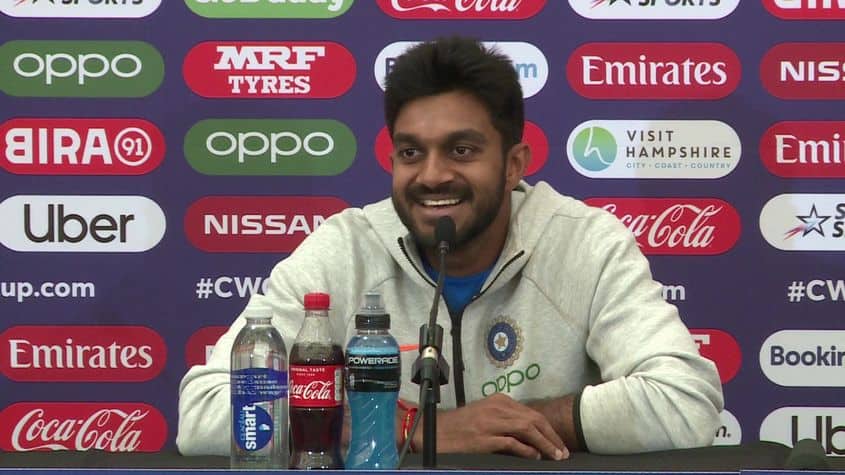 It was a case of out of the frying pan and into the fire for Indian all-rounder Vijay Shankar during his International Cricket Council (ICC) Men’s Cricket World Cup debut against Pakistan at Old Trafford on Sunday.

But after thriving in the pressure cooker environment, Shankar believes he is now ready for any challenge he is likely to face.

Thrust into the starting line-up as a replacement for the injured Shikhar Dhawan in Manchester, Shankar enjoyed a World Cup debut to remember, taking two vital wickets and making 15 not out.

The assured display capped a whirlwind six months for the 28-year-old, who only made his ODI bow for India against Australia in January this year.

And asked if the Pakistan match could be the catalyst for future success, Shankar said, “Yeah, it definitely gives any player some confidence because that is really needed for any individual. The last game gave me some confidence, and especially playing against Pakistan, making my debut against them.

“It was a very special thing for me, performing under pressure and coming out good. The team winning at the end of the day is really important. It felt really good at the end of the day. I always look to get better in all three aspects of the game as I know I can keep getting better. I know I can bowl a lot better than what I am bowling even now, so I'm just working on my bowling," the ICC press release quoted Shankar as saying.

“Whenever I get to a practice session, I make sure I improve a bit at least. I always have a good chat with my bowling coach and try and get better each and every day," he added.

Shankar will now hope to retain his place for Saturday’s clash with Afghanistan in Southampton, where India will once again put their unbeaten record in this year’s World Cup on the line.

A potential meeting with Hyderabad teammate Rashid Khan awaits, and Shankar was quick to warn his fellow countrymen of the danger posed by the talented leg-spinner.

“He's definitely one of the best bowlers right now in limited overs, and he has done well. For me, having played with him for a couple of years, it's very important for me to pick things from him, like whenever I bat against him in the nets, I try and pick his variations," he said.

“Definitely, he's a good bowler, but anyone can go for runs every day. It is about how we come back strong and for me, it is about how I play against him. So that will be the key," Shankar added.

On Thursday, Shankar was forced to miss the training session after being hit on his toes by a yorker from Jasprit Bumrah during a rain-hit practice session a day earlier. The Indian all-rounder was also seen walking around in slippers with a slight limp.

However, the Indian all-rounder confirmed that he is feeling a lot better now and will hopefully feature during Saturday's match against Afghanistan.