Amidst the ongoing 1st Test match between India and New Zealand at the Green Park Stadium in Kanpur, a video showing a man talking on the phone and supposedly chewing `tobacco` went viral and garnered all the attention on Thursday. 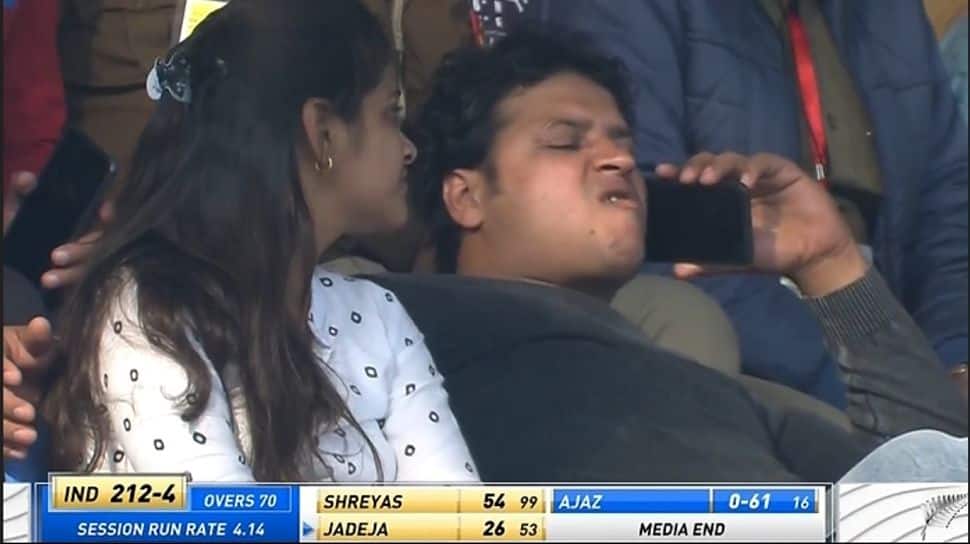 Kanpur: Amidst the ongoing 1st Test match between India and New Zealand at the Green Park Stadium in Kanpur, a video showing a man talking on the phone and supposedly chewing `tobacco` went viral and garnered all the attention on Thursday.

The person was identified as Shobit Pandey, popularly known as `Gutkha Man`, who is a resident of Maheshwari Mahol in Kanpur.

Pandey, on Friday, again came to witness the Test clash at the Green Park Stadium with a placard which read- "Eating tobacco is a bad habit", in Hindi.

Pandey became a centre of jokes, as he was trolled online and even known personalities like Dr Kumar Vishwas and former Indian batter Wasim Jaffer shared memes about him on Twitter.

Speaking to ANI, Shobit Pandey said, "First of all, I would like to clarify that I wasn`t eating tobacco. I was eating betel nut and was on call in with my friend, who was also watching the match in the same stadium but in a different stand."

"It was just a call of almost ten seconds and it went viral. My friend whom I was talking to was the one who broke the news to me that the video has gone viral. It went like a fire," he added.

He further said the only thing which is bothering him is that his sister, who had accompanied him at the stadium and was also seen in the viral video, is receiving nasty comments from some people.

"I didn`t do anything wrong, that is why I am not scared or embarrassed about this. I am just concerned that some people are passing nasty comments about my sister. And on the other hand, I am getting numerous calls from media houses and other people regarding the whole scenario and now I am getting irritated," said Pandey.

Coming to the Test match, New Zealand dominated India on the second day of the first Test match in Kanpur on Friday.

Tim Southee was one of the protagonists for visitors as he scalped five wickets that helped New Zealand to bundle India for 345 on Day 2.

Kiwis then continued to enjoy an excellent day as they ended on 129/0 after an unerring opening stand between Will Young and Tom Latham.The visitors are currently trailing by 216 runs. Meanwhile, Shreyas Iyer hit his maiden ton before New Zealand bundled India out for 345.