Indian batsman Rohit Sharma is the envy of all the top teams gearing up for the battle in the ICC World Cup 2019 semi-finals after his thunderous performance in the tournament. 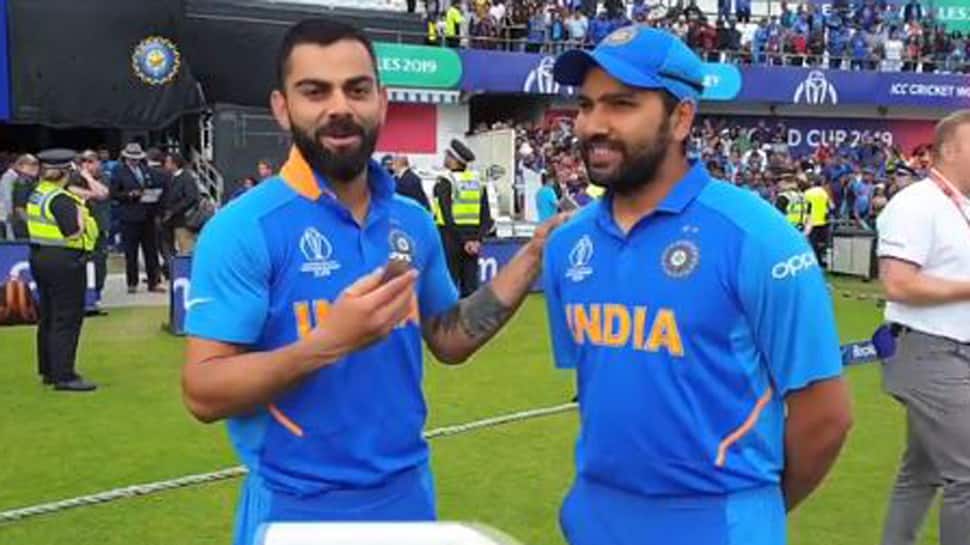 New Delhi: Indian batsman Rohit Sharma is the envy of all the top teams gearing up for the battle in the ICC World Cup 2019 semi-finals after his thunderous performance in the tournament.

Rohit has not only lifted India's performance in the tournament but also broken a few records. He is the only batsman to score five centuries in a single edition of the ICC Men's Cricket World Cup.

Being hailed as the 'hit-man' and 'run machine', Rohit scored his third consecutive ton in the tournament when the team was chasing a target of 265 runs, set by Sri Lanka. He is now on the coveted list of 10 players who have achieved this feat of scoring back-to-back three consecutive centuries in ODI.

With two centuries posted by Sharma and KL Rahul, India flattened Sri Lanka with a seven-wicket win on Saturday in Headlingly.

After leading Team India to victory against Sri Lanka, captain Virat Kohli indulged in fun banter with the 'Man of the Moment' Rohit Sharma.

In a two-minute-long video shared by the BCCI, Kohli is seen interviewing Rohit.

MUST WATCH: @imVkohli & @ImRo45 in conversation - Does it get any better than this? You cannot miss this one - by @RajalArora

For all of VK's & Hitman's Q & A click here https://t.co/xuPRQx7mB9 pic.twitter.com/nBxxONN9nb

Virat: Five centuries now, I have never seen it happen in any tournament so how does it feel to contribute for the team and batting the way you are with so much consistency.

Rohit: Ya, it is as we all know was an important tournament for all of us, we had some really good form coming into the tournament. So as a batting unit and top order batsman, It was not my job rather it was just that I wanted to carry on a form I had in the past. In the first game against South Africa, we did start off really well and then I had that confidence that we can continue to perform well and as a cricketer we know we don't look into the past and present is important. I am just trying to office in the present and see where we can take the team as a batting unit.

Virat: I have played with you for almost ten years now and I know 2011 was a miss for you and I know how much you felt that you should have been there in lifting the cup with all of us and in 2015 we again had a chance. So what's your motivation and how it is different from any other tournament when you come to the world cup knowing that as a senior player your performance is so crucial?

Rohit: World Cup is a premier tournament and the focus has to be on your routine and what you try and do in your bilateral games but we as cricketer we know that even though it is World Cup, it is a game of cricket and we have to play to win the game of cricket. So that's what I try and think.

Virat: Yes it's been absolutely magnificent to see him bat and hopefully two more big scores, two games to go for us and we can all lift that cup together so brilliant stuff till now and all the very best for the next few games.