According to the latest ICC Men's test rankings, with 928 points, Kohli is now the number 1 Test batsman, followed by Steve Smith of Australia (923 points).

Kohli went past Smith thanks to his sterling hundred against Bangladesh in the Day-night Test against Bangladesh at Eden Gardens. The Indian skipper had held the top spot for a long time before Steve Smith reclaimed the numero uno position with a mind-numbing 774 runs from 4 Tests in the Ashes series against England.

Virat Kohli back to No.1! 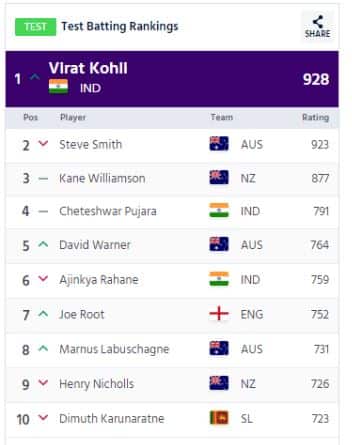 Ken Williamson of New Zeland holds the spot in the rankings with 877 points. He is closely followed by India's Cheteshwar Pujara who has 791 points.

On the fifth and sixth spots are - David Warner (764) of Australia and Ajinkya Rahane of India (759) points respectively.

England captain Joe Root, who was struggling for form, has also returned to the top 10 after his historic double hundred in the Hamilton Test against New Zealand.

Pakistan star Babar Azam rose 2 spots to 13th after some fine outings in Australia. The young batsman hit his 2nd Test hundred in The Gabba Test and followed it up with 97 in the Adelaide Day-night Test.