Virat Kohli’s Royal Challengers Bangalore vs Kolkata Knight Riders IPL 2021 Eliminator Live Streaming: RCB vs KKR When and where to watch, TV timings and other details

RCB will be brimming with confidence after securing a thrilling win over Delhi Capitals with a last-ball six in their final league match, finishing third in the standings with 18 points from 14 matches. 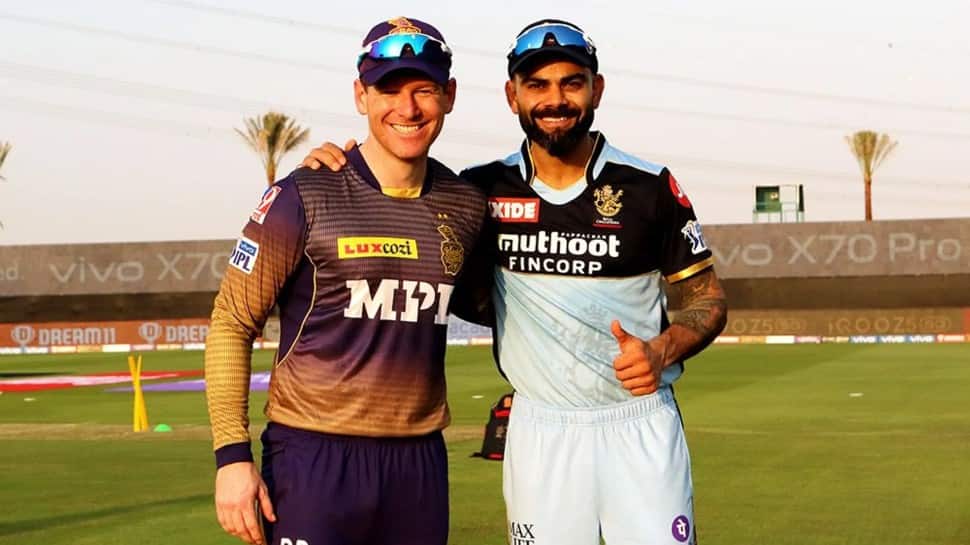 It will be a test of Virat Kohli’s tactical acumen against the ice-cool demeanour of Eoin Morgan when perennial underachievers Royal Challengers Bangalore clash with former champions Kolkata Knight Riders in the IPL Eliminator in Sharjah on Monday (October 11). Kohli, who has decided to step down from captaincy after this edition, has led RCB to the finals in 2016 besides reaching the play-offs twice in 2015 and 2020, and he would like to end things on a high in his last hurray as captain.

For Morgan, it is about regaining the lost glory for KKR, a team which achieved great success under Gautam Gambhir, who had led them to two IPL titles in a space of three years in 2012 and 2014. On paper, it would be a battle between two evenly-poised teams, but overall, KKR has a slight edge, having won 15 out of 28 matches they played over the years.

However, RCB will be brimming with confidence after securing a thrilling win over Delhi Capitals with a last-ball six in their final league match, finishing third in the standings with 18 points from 14 matches. KKR, on the other hand, scripted a terrific turnaround, finishing fourth with 14 points after winning five of seven games in the UAE leg following a lacklustre performance in the first phase.

Morgan’s men had notched up a massive 86-run win over Rajasthan Royals to seal their play-offs spot and would look to carry the momentum into the Eliminator. But past records will count for little and it will boil down to winning small moments in the match, something which Kohli and Morgan would know pretty well. Both the captains have enough ammunition in their disposal and it will be all about managing the resources.

RCB possess a formidable batting line-up that includes AB de Villiers, Glenn Maxwell and Devdutt Padikkal apart from Kohli but they have failed to find a perfect combination so far. While their top-order has given starts on most occasions, the middle-order looked unsure with the ploy to get Daniel Christian at number 3 backfiring. Also AB de Villiers has been wasted at number 5 but Srikar Bharat’s emergence has been a big positive.

After finishing the league stages on a high, our focus will be on the all-important knockout game tomorrow in Sharjah. Here's everything you need to know about #RCBvKKR. #PlayBold #WeAreChallengers #IPL2021 #PlayOffs pic.twitter.com/awFvfHmy63

One man who has stood out for RCB is Glenn Maxwell. The Australian power-hitter has 498 runs and has been Kohli's go to man this season.

In bowling, Harshal Patel has been simply sensational with 30 wickets in 14 games, which includes a hat-trick against Mumbai Indians. Mohammed Siraj and George Garton too have been impressive, while Yuzvendra Chahal has answered his critics with 16 wickets this season.

KKR too has been served well by the bowlers, who has churned out some terrific performances. While pace duo of Lockie Ferguson and Shivam Mavi have peaked at the right time, sharing seven wickets in their last match, the spinners led by Varun Chakravarthy, Sunil Narine and Shakib Al Hasan too have been impressive.

What time does the IPL 2021 Eliminator between Royal Challengers and Kolkata Knight Riders begin?

The IPL 2021 Eliminator between Royal Challengers and Kolkata Knight Riders is scheduled to start at 07:30 pm. The toss will take place at 07:00 pm.

Where is the IPL 2021 Eliminator between Royal Challengers and Kolkata Knight Riders taking place?

The IPL 2021 Eliminator between Royal Challengers and Kolkata Knight Riders will be played in Sharjah.

Where can I catch the live streaming of the IPL 2021 Eliminator between Royal Challengers and Kolkata Knight Riders?

The live streaming of the IPL 2021 Eliminator between Royal Challengers and Kolkata Knight Riders will be available on the Hotstar app and website. You can also catch the live commentary/scorecard and latest updates of the match here at zeenews.india.com.

IPL 2021: MS Dhoni’s cameo made Virat Kohli jump out of his seat