Kumble was the coach of the Indian team between 2016 and 2017 before stepping down from the role just a day after India lost to Pakistan in the final of the Champions Trophy after an alleged rift with captain Virat Kohli. 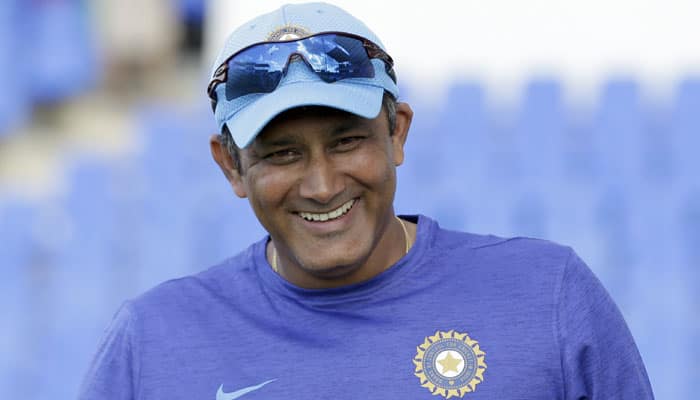 Former India cricketer Virender Sehwag on Wednesday put his weight behind Anil Kumble to become a national selector in the future.

"When Anil Kumble became the captain, he came to my room and said 'go and play how you play as in the next two series you won't be dropped'. That kind of confidence he gave... I think he is the right person (to become a national selector)," Sehwag told reporters on the sidelines of the launch of The Selector app.

Kumble was the coach of the Indian team between 2016 and 2017 before stepping down from the role just a day after India lost to Pakistan in the final of the Champions Trophy after an alleged rift with captain Virat Kohli.

The spin great is now the Chairman of the ICC Cricket Committee.

Sehwag also commented on the BCCI finally agreeing to come under the ambit of the National Anti-Doping Agency (NADA).

"Indian players have an issue with the whereabouts clause. We have been tested several times both in and out of competition. No current player has commented on it yet... So we have to wait and see," said Sehwag.

On the stringent conflict of interest rules under the new BCCI constitution, Sehwag said he didn't quite understand the issue.

"I don't understand this conflict of interest. But for a player to be banned from everything... I don't know what else we can do," he said.

India will take on the West Indies in the first match of the two-Test series in Antigua from Thursday and the opinions are divided over who among Rohit Sharma and Ajinkya Rahane should play.

Sehwag said that Rohit can fit in only if Kohli plays four bowlers.

"Rohit can play the Test against the West Indies only if India play four bowlers. Else I would play only Rahane despite his lack of form," the former opener said.

Sehwag also made light of the mandatory use of neck pads in the aftermath of Steve Smith being hit badly by a ferocious Jofra Archer bouncer in the second Ashes Test at Lord's.

"I never used a chest pad in my life... So I don't think I need to use neck pads. Batsmen have the bat in hand, helmet on head, what more do you need. ICC has allowed only two bouncers," he said.

Sehwag also felt that Mahendra Singh Dhoni should have batted at No. 5 in the World Cup semifinal which India lost to New Zealand.

Sehwag also expressed his happiness over out of favour India pacer and his former teammate Sreesanth's ban being reduced to seven years.

"Good to see Sreesanth's ban is reduced. Happy for him. Hope to see him play for some club or state," Sehwag concluded.

BCCI ropes in Paytm as title sponsor till 2023