Rohit Sharma was declared Man of the Match for his blistering knock of 176 and 160 in the two innings for India. 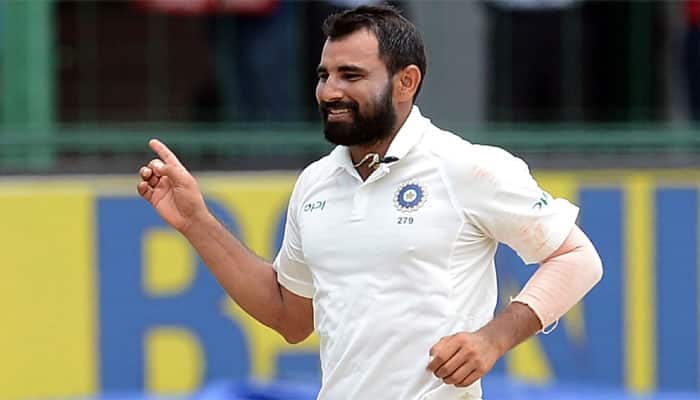 Mohammad Shami wreaked havoc with a five-wicket haul in the second innings while Ravindra Jadeja well-supported him with four wickets as India seal a crushing 203-run victory over South Africa on the fifth and final day of the opening Test at the ACA-VDCA Cricket Stadium in Visakhapatnam on Sunday.

Chasing a respectable target of 395 runs, Shami and Jadeja tore apart South Africa's batting line-up to reduce them to 70/8 in the second innings before Dane Piedt and Senuran Muthusamy staged a fightback for the visitors with a crucial 91-run partnership for the ninth wicket.

However, Mohammad Shami bagged the remaining two wickets within a gap of four overs to bundle out South Africa for 191. Dane Piedt was the highest scorer for South Africa in the second innings with 56 runs while Muthusamy smashed a 49-run knock.

Shami finished with brilliant figures of five for 35 while Jadeja ended up with the figures of four for 87. Notably, Jadeja bagged the wickets of Aiden Markram, Vernon Philander and Keshav Maharaj in a single over to put the hosts on the verge of victory before Lunch.

Meanwhile, Ravichandran Ashwin--who claimed seven wickets in the first innings--managed to grab just one wicket in the second to complete 350 wickets in the longest format of the game. Ashwin has now joined former Sri Lankan cricketer Muttiah Muralitharan as the only men to have bagged 350 Test wickets in just their 66th Test.

Subsequently, Ravindra Jadeja scored a significant 40-run knock while skipper Virat Kohli and Ajinkya Rahane remained unbeaten at their respective scores of 31 and 27 before India declared their second innings at 323/4 to set a 395-run target for South Africa.

In the first innings, Ravichandran Ashwin bagged seven wickets for 145 runs as India bundled out the Proteas for 431 in their first innings despite crucial knocks by Dean Elgar (160) and Quinton de Kock (111).

Meanwhile, Rohit Sharma was declared Man of the Match for his blistering knock of 176 and 160 in the two innings for India.