Dean Elgar (160) and Quinton de Kock (111) scored centuries on Day 3 of the first Test between India and South Africa at the ACA-VDCA Stadium, but R. Ashwin finished with his 27th fifer to bring the hosts right back into the game on Friday. 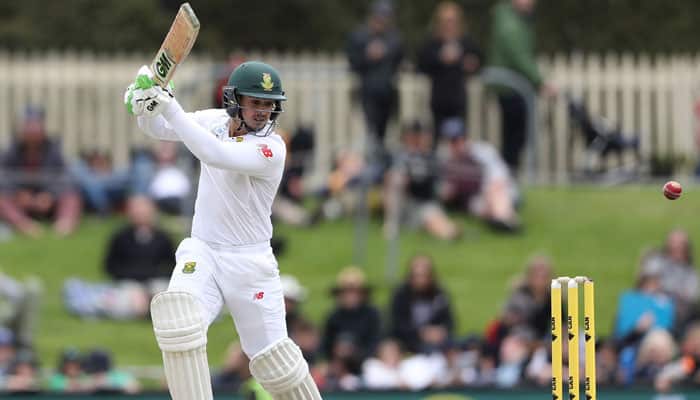 Visakhapatnam: Dean Elgar (160) and Quinton de Kock (111) scored centuries on Day 3 of the first Test between India and South Africa at the ACA-VDCA Stadium, but R. Ashwin finished with his 27th fifer to bring the hosts right back into the game on Friday.

At stumps, South Africa's score read 385/8 with Senuran Muthusamy (12) and Keshav Maharaj (3) at the crease. The Proteas still trail by 117 runs with just two wickets in the bag.

If the Proteas dominated the first two sessions of the day, the last session was clearly shared as the spin duo of Ashwin and Ravindra Jadeja clawed back.

Jadeja picked up his 200th Test wicket in the final session and in the process became the fastest left-arm bowler to reach the milestone. He eclipsed the feat of Sri Lanka spinner Rangana Herath, who had reached the landmark in his 47th Test match, by reaching the feat in his 44th game.

The spinner could have reached the feat in the first session of the third day itself, but Wriddhiman Saha dropped Dean Elgar. And it was Elgar who turned out to be his 200th scalp as the Proteas opener was caught brilliantly at the square-leg boundary by Cheteshwar Pujara.

The morning session though saw the Proteas put up a disciplined show as skipper Faf du Plessis hung in with opener Elgar after Temba Bavuma (18) was dismissed by Ishant Sharma in the seventh over of the day. du Plessis and Elgar showed great determination as the pair posted a fifth-wicket partnership of 115 before the captain was dismissed by Ashwin when he pushed a slow ball straight to Pujara at leg slip.

However, that was not the end of it for India with De Kock then sticking in with Elgar. The pair ended up surpassing the fifth wicket stand between Elgar and his skipper, putting on 164 runs. Jadeja finally provided the breakthrough as Elgar had to walk back at the end of a 287-ball knock on a wicket that was clearly helping the Indian spinners. The knock will give him a lot of confidence going into the rest of the series.

Although Elgar was back in the hut, De Kock continued to stay positive and went on to make his fifth Test century with a six off Ashwin. The Proteas wicketkeeper then looked to step up the scoring rate, but fell to a brilliant delivery from Ashwin.

Having taken the previous two away from the batsman, Ashwin got the third one to hold its line after pitching and de Kock made the mistake of playing for the turn, to only see his stump disturbed. The latter would then go on to dismiss Philander to complete another five-wicket haul.