Rohit Sharma and Chesteshwar Pujara`s knock of 127 and 81 respectively in the second innings put India on top on day four of the first Test match against South Africa. 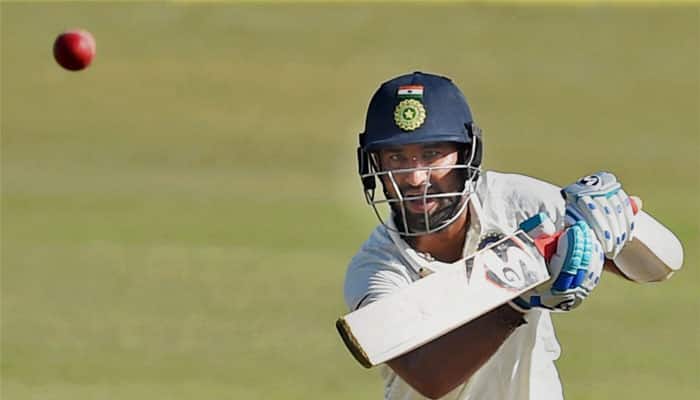 Rohit Sharma and Chesteshwar Pujara`s knock of 127 and 81 respectively in the second innings put India on top on day four of the first Test match against South Africa.

South Africa ended day four at a score of 11/1, still 384 runs away from the target.

In pursuit of 395, South Africa`s final innings got off to a bad start as centurion from the first innings, Dean Elgar (2) was trapped in front by Ravindra Jadeja, getting him leg-before wicket.

The umpire had originally ruled Elgar not out, but Indians opted for a review and the decision went in their favour.

Aiden Markram and Theunis de Bruyn ensured South Africa do not lose any more wicket before the close of play and the Proteas will resume day five with nine wickets in hand.

Resuming day four at 385/8, South Africa lost their ninth wicket cheaply as Keshav Maharaj (9) was sent back to the pavilion by Ravichandran Ashwin, reducing Proteas to 396/9.

Senuran Muthuswamy and Kagiso Rabada added 35 more runs to the Proteas total before Rabada`s (15) dismissal at the hands of Ashwin.South Africa was bowled out for 431 with Muthuswamy remaining unbeaten at 33.

This gave India a lead of 71 runs and Ashwin was the leading wicket-taker for India as he scalped seven wickets.

In the second innings, India`s openers Mayank Agarwal and Rohit were not able to repeat their heroics from the first innings as Mayank (7) was sent back to the pavilion by Maharaj with just 21 runs on the board.Rohit and Pujara ensured India do not lose any more wicket before the lunch break.

At the interval, India went in with a score of 35/1, with a lead of 106 runs.After the lunch break, South Africa was able to choke the runs as Pujara struggled to rotate the strike.

However, Pujara quickly got a move on and increased the tempo in his innings. He along with Rohit ensured India does not lose any wicket before the tea break and the side went into the interval at the score of 175/1 with a lead of 246 runs.

After the tea break, India changed gears and started to play some big shots. In search of some quick runs, Pujara (81) was dismissed by Vernon Philander, ending the partnership of 169 runs with Rohit.

Rohit, however, kept on scoring runs and he brought up his second century of the match. After reaching the mark, he hit Dane Piedt for three consecutive sixes.However, Rohit (127) was not able to stay at the crease for a long time and was finally sent back to the pavilion by Maharaj, reducing India to 239/3.

Skipper Virat Kohli next came out to bat and he started to play aggressive shots from the beginning of his innings. He found the support from Jadeja and the duo added 47 runs. Jadeja (40) was clean bowled by Kagiso Rabada in the 63rd over, reducing India to 286/4.

Ajinkya Rahane next came out to bat and he played a quickfire knock of 27 runs off just 17 balls.

With India`s score at 323/4, skipper Kohli decided to declare the innings and set South Africa a target of 395 runs. Kohli remained unbeaten on 31.