It was skipper Vijay Shankar who led from the front when it came to the dance number although it was TN and Punjab Kings batter Shahrukh Khan, who sealed the deal for his side with a six off the final ball to win the match. 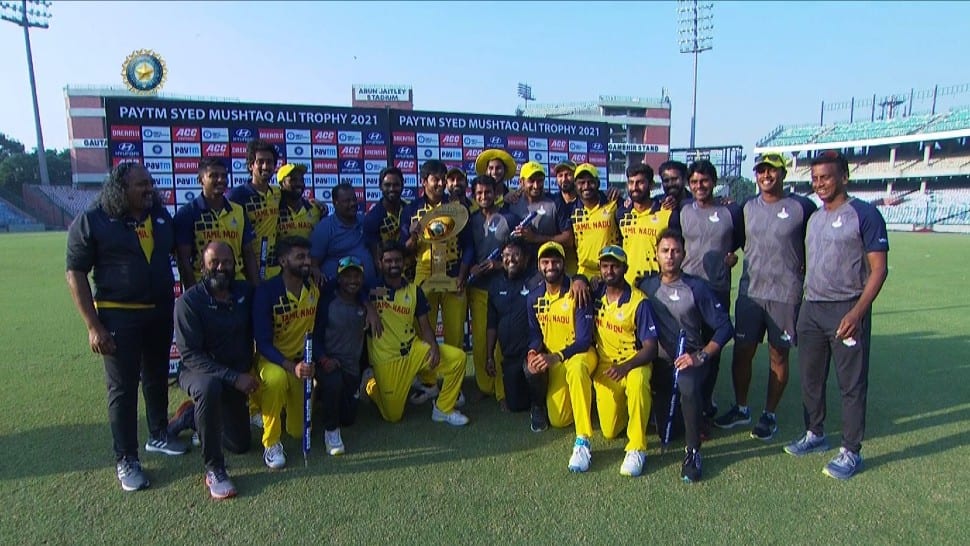 Vijay Shankar-led Tamil Nadu team won a thrilling Syed Mushtaq Ali Trophy final against Karnataka at the Arun Jaitley Stadium in New Delhi on Monday (November 22). This was the third time that Tamil Nadu have won the domestic T20 crown and the dressing room quickly entered into a party mode as the entire team danced to popular number ‘Vaathi Coming’ from blockbuster ‘Vijay the Master’.

It was skipper Shankar who led from the front when it came to the dance number although it was TN and Punjab Kings batter Shahrukh Khan, who sealed the deal for his side with a six off the final ball to win the match. Shahrukh’s 33-run cameo off 15 balls helped Tamil Nadu win the thriller by four wickets.

Great to see TN boys continuing the tradition of celebrating #SyedMushtaqAli title with a #VaathiComing dance with the captain leading from the front. For the 2020 season title, it was DK. This time, it's Vijay Shankar. #Master pic.twitter.com/YRudWjyQS8

Chasing 152, Tamil Nadu got off to a quickfire start as Hari Nishanth and N Jagadeeshan put on 29 runs for the first wicket, however, the partnership did not sustain itself for a long haul as Nishanth (23) was sent back to the pavilion via a run-out in the fourth over. Sai Sudharsan then joined Jagadeesan in the middle and the duo kept on moving the scoreboard at a brisk pace.

Karun Nair provided the much-needed breakthrough to Karnataka as he dismissed Sudharsan (9) reducing Tamil Nadu to 51/2 in the eighth over. Karnataka bowlers managed to maintain a stranglehold, resulting in Shankar (18) and Jagadeeshan (41) dismissal and Tamil Nadu needed 57 to win from 28 balls.

Shahrukh Khan however changed the complexion of the game as he smashed 33 runs off just 15 balls, taking Tamil Nadu to a four-wicket win. Earlier, Abhinav Manohar and Praveen Dubey played knocks of 46 and 33 as Karnataka posted 151/7 in the allotted 20 overs.