Just to put things in proper perspective, Kohli's combined effort so far is 12781, against Tendulkar's 34357 runs. 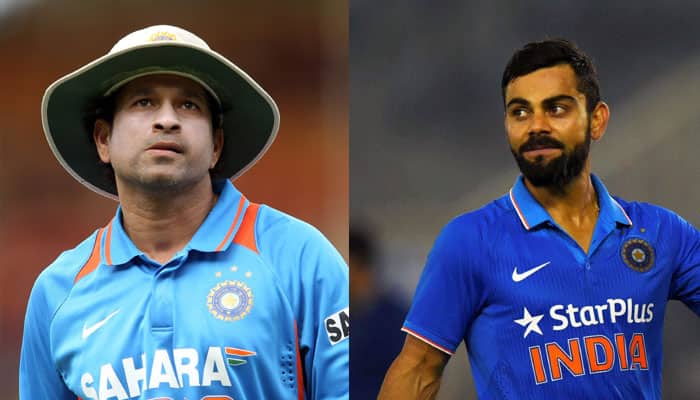 New Delhi: It's indeed ludicrous to compare modern day players of players of past generations. The simple fact that mindsets, approaches, and the general outlook on not only the game but also on life itself were vastly different from one generation to another kills the very purpose of doing such a comparison. So thus the end result too. One great in another era may not find the mention in another. The same can be said about Sachin Tendulkar and Virat Kohli.

But the comparison continues. The overwhelming and ever evolving debate between Tendulkar and Kohli has enamoured some of the best minds of the game to come to their own verdicts. But not many have managed to provide a good argument when they present their 'facts', which more or less rely on the records.

The latest to join this bandwagon is Adam Gilchrist, and the Aussie great has provided a brilliant analysis, but not yet giving his verdict on who is a better player.

Gilchrist, 44, during a promotional event in Mumbai spared time to comment on the comparisons made between the two Indian batsmen, and described Kohli as a next generation player, while hailing Tendulkar as undoubtedly the best he has played against.

"They are different types of players. Virat is the ‘next generation’ player. As an opponent you may feel like he is offering you a chance, but that comes with a risk too. He can take it away from you quickly. Sachin, on the other hand, was so clinical. So often you felt like you just won’t get him out, dislodge him. He would just build, build, and build. He is the best player I have played against," he said.

But Gilchrist felt that Kohli will be right up there, among the greatest when the Delhi batsman end his career.

"I think by the end of Virat’s career, his record and the way he is regarded in the cricketing world will be right up there, close to Sachin," he added.

Tendulkar, regarded as probably the greatest batsman ever to have played the game, has 100 hundreds, a record which many thought would survive the test of time, until the arrival of Kohli.

And many think that Kohli, 28, has the temperament and technique to break all the batting records. But to come close to matching Tendulkar's record, Kohli will need to survive the rigours of modern day cricket first.

If the current India Test captain manages to keep himself not only fit but also relevant, then he can surely think of becoming probably the greatest ever, in terms of records, at least.

Tendulkar spent a quarter of a century playing cricket to produced 34357 runs in Test, ODI and T20I, which is 6341 runs more than the second highest, managed by Kumar Sangakkara.

Just to put things in proper perspective, Kohli's combined effort so far is 12781.

Peppered with repeated bouncers, Cheteshwar Pujara got hit on helmet not once but twice – VIDEO