India versus Pakistan cricket match is the most anticipated game in the world. 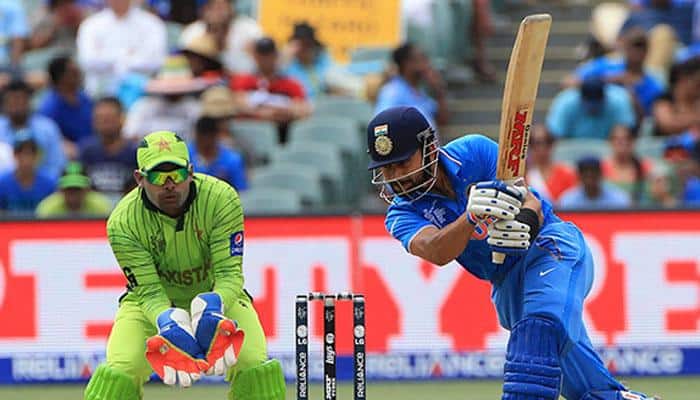 New Delhi: India versus Pakistan cricket match is the most anticipated game in the world. On June 16, when the Virat Kohli-led team clashes with Sarfaraz Ahmed's squad in the ICC World Cup 2019 in England's Manchester, over 150 crore people will be glued into the match. But the fickle English weather has already played spoilsport on the tournament and a day ahead of the match between arch-rivals India and Pakistan in ICC  World Cup 2019, rain scare hovers over the city of Manchester.

So far four of 19 matches this World Cup were called off due to heavy downpour and Sri Lanka have suffered twice.  However, with not so promising situations around, the ICC would desperately want the high-octane game to take place on June 16.

India's last match with New Zealand, which was scheduled to take place in Nottingham's Trent Bridge, resulted in a washout but Manchester's clear sky on Friday gave some hope to fans and supporters for the Sunday faceoff between India and Pakistan.

As per BBC weather, a brief spell of showers is expected between 12 pm local time and 1 pm local time.  The match commences at 10:30 pm so we might witness a start without interruption. However, the showers might hamper the second half of the match.

The Sunday match is extremely crucial for Pakistan as they cannot cope up with a washout. The team has lost out on two out of four matches, hence, cannot tackle an abandonment. While India can still handle a washout as they will square off with relatively weaker teams like Bangladesh, Sri Lanka and Afghanistan in the upcoming clashes of the mega event.

In the coveted points table, the Virat Kohli-led team have maintained the third position while Pakistan is at the eight-spot at the ten-team standings.