India will take on Sri Lanka in their last match of the group stage on Saturday. 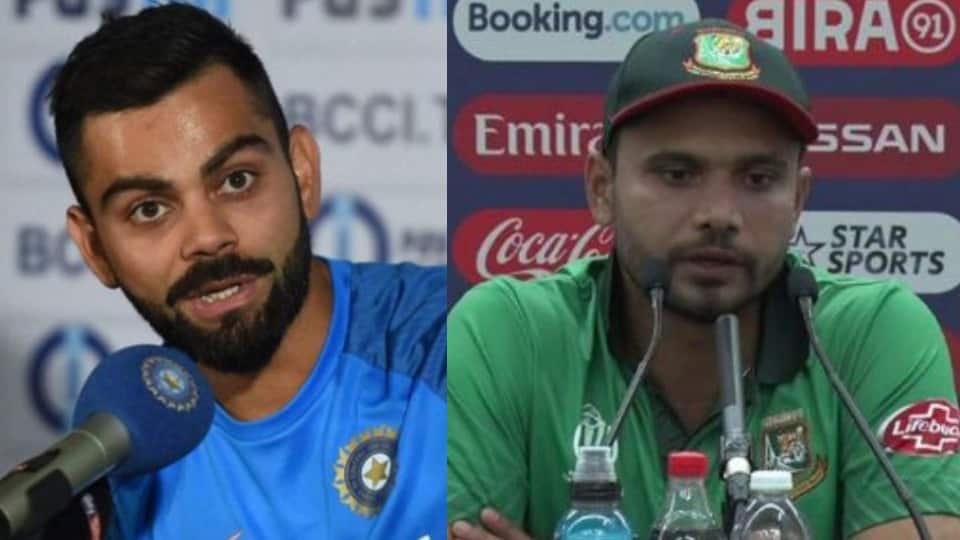 Openers Rohit Sharma and KL Rahul stitched a huge partnership of 180 runs before Jasprit Bumrah claimed a four-wicket haul as India booked their place in the semi-finals of the 2019 International Cricket Council (ICC) with a narrow 28-run win over Bangladesh at Edgbaston Cricket Ground in Birmingham on Tuesday.

Opting to bat first, Rohit scored a blistering knock of 104 runs but also forged a mammoth stand for the opening wicket with KL Rahul (77) to help India score a total of 314 for nine in their stipulated 50 overs. Rishabh Pant was another notable scorer for the two-time champions with a 41-ball 48.

Mustafizur Rahman was the pick of the bowlers for Bangladesh as he staged a late fightback for his side with the brilliant figures of five for 59.

In reply, Shakib Al Hasan (66 off 74 balls) and Mohammad Saifuddin (51 not out) put up a decent batting performance to bring Bangladesh quite closer to the victory. However, the Indian bowlers held their nerves to bundle the Mashrafe Mortaza-led side out for 286 in 48 overs.

Jasprit Bumrah was the pick of the bowlers for India with figures of four for 55, followed by Hardik Pandya who bagged three scalps while giving away 60 runs. Mohammad Shami, Yuzvendra Chahal and Bhuvneshwar Kumar also contributed with a wicket each.

# Rohit Sharma struck a blistering knock of 104 runs off 92 balls. It was his 26th century in the One-Day Internationals (ODI) and the fourth ton of the 2019 World Cup.

# KL Rahul (77) and Rohit Sharma stitched a partnership of 180 runs for the first wicket against Bangladesh. It was the highest opening partnership for the Men in Blue in a World Cup match as well as the highest opening stand in the ongoing edition of the marquee event. The duo has also surpassed 160-run stand by England openers Jason Roy and Jonny Bairstow in the ongoing World Cup.

# It was only the fourth time in the history of the World Cup that the Indian openers have stitched a 150-run stand. Ajay Jadeja and Sachin Tendulkar became the first Indian duo to reach the mark in the 1996 edition of the mega event before Tendulkar and Sehwag shared more than 150-run stand for the first wicket in 2003. In the last edition of the tournament, Rohit and Shikhar Dhawan stitched a huge 174-run stand in a 2015 World Cup match.

# By notching up his fourth century in the 2019 World Cup, Rohit became only the second batsman after Sri Lankan legend Kumar Sangakkara to notch up this number of tons in a single edition of the quadrennial event.

# Bangladesh bowler Mustafizur Rahman finished with the brilliant figures of five for 59. It is for the third time that Mustafizur has recorded a five-wicket haul against India in ODIs.

The Mashraqfe Mortaza-led side, who has been knocked out of the race for the semi-final spot, will next play against Pakistan on July 5 while India will take on Sri Lanka in their last match of the group stage a day later.