World Cup 2019: No dousing the fire in Jonny Bairstow's belly

Since his return to the side in 2015, Jonny Bairstow has transformed into this new breed of fearless batsman England have repeatedly turned to in order to rekindle their ODI mojo. 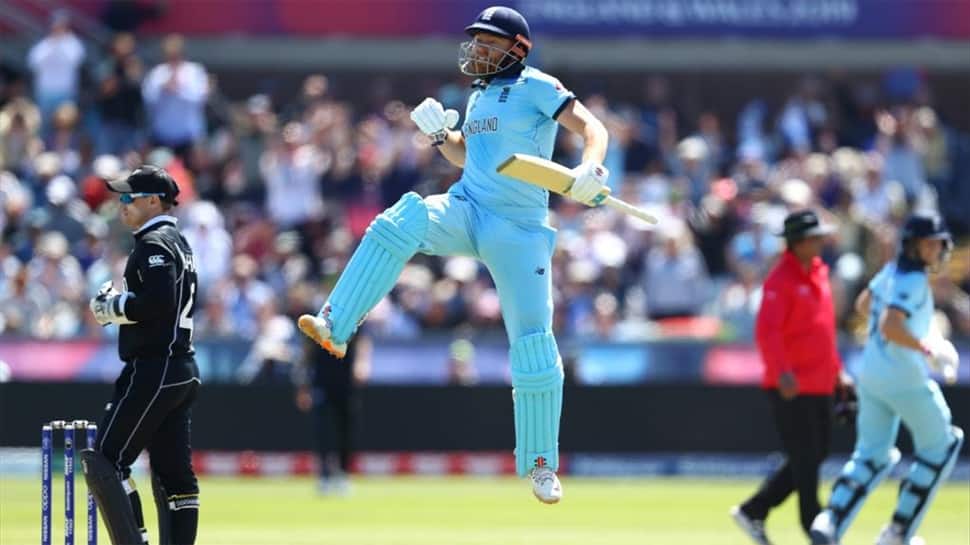 CHESTER-LE-STREET: In all the euphoria surrounding Rohit Sharma’s four centuries, Jonny Bairstow's prolific batting form has been reduced to an afterthought. After a difficult week, which saw Bairstow emerge as a villain to the England public, he’s put it behind and come up with match-winning performances that have taken England to their first World Cup semi-final since 1992.

After all the travesty, in the end who does Bairstow turn to? No one but himself. Since his return to the side in 2015, Bairstow has transformed into this new breed of fearless batsman England have repeatedly turned to in order to rekindle their ODI mojo. From World Cup favourites, to hopefuls, and then again favourites, England have risen from the dead. After receiving a body blow through consecutive losses against Sri Lanka and Australia, England, in just four days, have revived themselves through adversity, with Bairstow being at the centre of their resurgence.

Against Sri Lanka, Bairstow was out for a golden duck, whereas he made a jittery 27 against Australia. Both times Bairstow failed, England plummeted. From there, he took off and scored consecutive match-winning centuries – against a rampaging India and a steeply-declining New Zealand. Two wins out of two, England through.

On Wednesday, Bairstow finished what he had started on this very ground four years ago. At the Emirates Riverside in Chester-Le-Street in 2015, Bairstow had ended his 18 months of frustration to restart his credentials as an international cricketer with an unbeaten 83 off 60 balls that helped England clinch a thriller against New Zealand in Durham. That innings was considered Bairstow’s second-coming in ODIs. Against the same opponent, this time at the World Cup, at home, Bairstow gave England cricket a moment it has so desperately waited for.

The ginger-boy from Yorkshire, Bairstow is not one to hold back emotions. If he was vocal about what he felt about things that were being said about him and his team, on the pitch, Bairstow, as the old expression goes, let his bat do the talking. In both innings, when Bairstow reached his century, the celebration, although emotion-filled, were contrasting.

Against India, as Bairstow reached the three-figure mark, he dropped his helmet and spread his arms. It was a nice way to return to form, handing a pasting to their two premier wrist-spinners, Yuzvendra Chahal and Kuldeep Yadav. Against New Zealand, Bairstow, taking a cue from his Sunrisers Hyderabad opening partner David Warner, leaped and punched the air before rubbing his head. It was a cheeky jibe at Michael Vaughan, who didn’t mind and took to Twitter to congratulate Bairstow. Vaughan may even end up taking some credit himself. And why not?

On a flat deck, there was fun to be had, and Bairstow took upon himself of treating the crowd to some good old violent hitting. While his partner Jason Roy set the tone by taking on Mitchell Santner, Bairstow was bullish against Tim Southee. It had to be him. The destruction Southee had caused to England four years ago in Dunedin, it all came full circle. Bairstow, not part of that campaign, smashed six boundaries off Southee’s first 16 balls; all muscle. By the time he had got to his fifty off 46 deliveries, Bairstow had smoked nine boundaries, three of which were hit off Southee in succession. If this was brute power, then Bairstow showed finesse with dabs and delicate late cuts.

On surfaces that begin flat, perhaps there is no better batting line-up than that of England. More so, no better opening pair than England’s. Great things always arrive in pairs and Bairstow’s success as a top-order batsman has coincided with the impact of his partner Roy. Together, they have given England explosive starts ever since the duo came together two years ago, and the numbers prove it.

Rubbing shoulders with Rohit and Shikhar Dhawan, David Warner and Aaron Finch, Bairstow and Roy are right up there. They average 67.70 for the first wicket and score quicker than a run a ball. Roy and Bairstow are already England’s most successful opening partnership, with 2099 runs. Their average together is 15 runs ahead of the next closest opening stand in the top 20 – Desmond Haynes and Gordon Greenidge.

In 31 innings, 10 times have they put on 100 or more – third consecutive in the World Cup. If England are to win this tournament, Roy’s physio, who cured a hamstring so effectively that the batsman returned with explosive fifties, won’t deserve any less appreciation than the guys. Both openers embody England’s fearless aura. England’s pace dropped once Bairstow departed. Hence, it was crucial to score in the first 20 overs. Bairstow and Roy did what they do best – go after the bowling. Result: 283 runs in two innings.

Since May 2017, Bairstow has reeled off 2277 runs at 54 with nine hundreds. Rest assured, few would Bairstow consider more vital than the last two. It has assured England of a rematch – against either India or Australia, en route to achieving their cricketing nirvana.

Afghanistan vs West Indies, World Cup 2019: As it happened