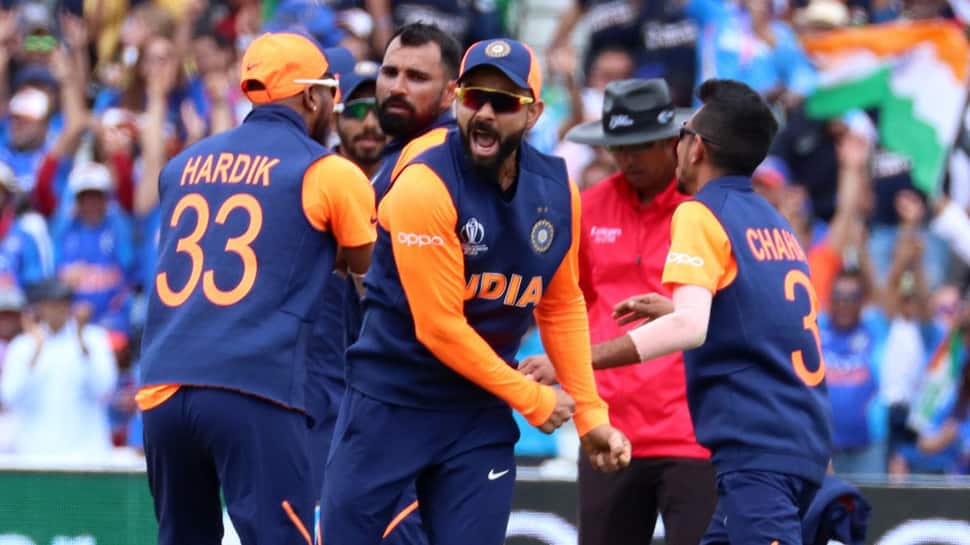 Chasing a competitive target of 338 runs to win at the Edgbaston in Birmingham, India lost opener KL Rahul for a duck before Rohit Sharma not only brought up his 25th ODI ton but also forged a 138-run partnership with skipper Virat Kohli (66) for the second wicket to put the Men in Blue in the driver's seat.

However, after the duo's dismissal, Rishabh Pant (32), Hardik Pandya (45), Mahendra Singh Dhoni (unbeaten at 42) and Kedar Jadhav (unbeaten at 12) failed to provide enough fight back as the England bowlers restricted India to a score of 306 for five and snapped their unbeaten streak in the 2019 edition of the tournament.

Earlier, opener Jonny Bairstow (111) stitched a huge partnership of 160 runs with his opening partner Jason Roy (66) to help the Eoin Morgan-led side set a good total of 337 for seven. Ben Stokes was another notable contributor for England with 79 runs.

For India, Mohammad Shami was the pick of the bowlers as he scalped his second five-wicket haul by finishing with the figures of five for 69.

Let us take a look at the list of players with most sixes, fours, best batting average and best bowling figures after India vs England clash:

England skipper Eoin Morgan is still leading the list of players with most number of sixes in the ongoing 2019 edition of the ICC World Cup. Morgan, who created history with most sixes by a player in an ODI inning when he smashed 17 maximums during his side's clash against minnows Afghanistan at the Old Trafford in Manchester on June 18, stands at  the top spot with 22 maximums in seven matches.

England opener Jonny Bairstow, who scored six maximums in his blistering knock of 111 runs against India, has broken into the top 10 to stand at the fourth position with 10 sixes.

With a total of 49 fours in eight matches, Australian opener David Warner currently holds the record of a maximum number of boundaries in the ongoing cricket's showpiece event.

Bangladesh all-rounder Shakib Al Hasan and Australian skipper Aaron Finch are standing at the second and third positions with 48 and 47 boundaries, respectively.

Indian opener Rohit Sharma, who smashed 15 boundaries during his 103-run knock against England, has moved up by three spots to occupy fourth position. He has a total of 46 fours in his tally from six matches.

Bangladesh all-rounder Shakib Al Hasan and Indian opener Rohit Sharma are placed on the second and third spots respectively with averages of 95.20 and 88.00.

Australian pacer Mitchell Starc finished with the brilliant figures of five for 26 during Australia's ICC World Cup 2019 tie against New Zealand. It is by far the best bowling figures of the 2019 World Cup.

Bangladesh all-rounder Shakib Al Hasan and Pakistan pacer Mohammad Amir occupy the second and third spots, respectively after registering figures of 5/29 and 5/30 against Afghanistan and Australia.

Indian pacer Mohammad Shami continues to lead the list of players with best bowling strike rate. He maintains the strike rate of 12.07 after three matches to stand ahead of Australian pacer Mitchell Starc (18.58) and New Zealand all-rounder Jimmy Neesham (20).