Australia defeated New Zealand by 86 runs in match 37 of the ICC Cricket World Cup 2019 at Lord's, London to maintain their winning streak in the tournament. 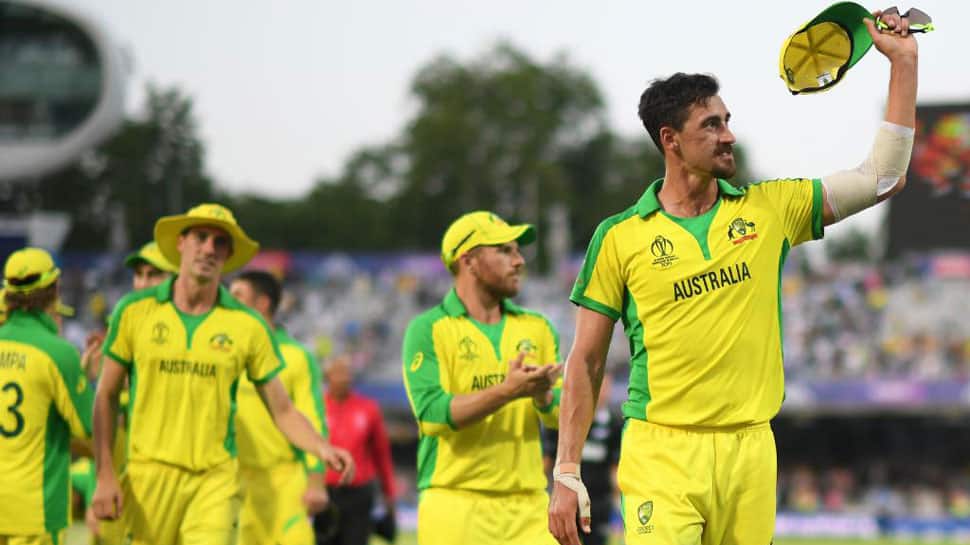 Australia defeated New Zealand by 86 runs in match 37 of the ICC Cricket World Cup 2019 at Lord's, London to maintain their winning streak in the tournament.

However, the outfit was able to recover following the dismissals on the back of a 107-run partnership between Alex Carey and Usman Khawaja. New Zealand made a late comeback in the clash following a hat-trick by pacer Trent Boult who finished with four wickets, resulting in Australia posting a total of 243 runs for the loss of nine wickets in 50 overs.

Australia went about defending the target of 244 in a disciplined manner, making it difficult for the batsmen to score freely. Openers Ross Taylor and Henry Nicholls were dismissed cheaply, with the Kiwis briefly in the game following a partnership of 55 runs between skipper Kane Williamson and Ross Taylor.

However, the duo were soon dismissed as Mitchell Starc and Pat Cummins made their presence felt, resulting in New Zealand eventually posting a score of 200 runs for the loss of six wickets in 50 overs. Starc was the pick of the bowlers registering his second five-wicket haul in the ICC World Cup 2019.

Let us take a look at the list of players with most sixes, fours, best batting average and best bowling figures after the New Zealand vs Australia clash:

England skipper Eoin Morgan continues to lead the charts with 22 sixes in seven matches. Australian skipper Aaron Finch who did not score a single six against New Zealand on Saturday is placed on the second spot with 18 sixes.

Windies veteran Chris Gayle and Indian opener Rohit Sharma are placed on the third and fourth spots with 10 and 7 sixes respectively. Windies all-rounder Carlos Braithwaite rounds off the top-five list with seven sixes.

Australian skipper Aaron Finch who scored only one boundary on Saturday is placed on the third spot with 47 boundaries.

New Zealand skipper Kane Williamson who scored a 51-ball 40 against Australia on Saturday is currently on top with a batting average of 113.50. Bangladesh all-rounder Shakib Al Hasan and Indian opener Rohit Sharma are placed on the second and third spots respectively with averages of 95.20 and 84.50.

Australian pacer Mitchell Starc who picked his second five-wicket haul of the ICC World Cup 2019 on Saturday against New Zealand, leads the tally with figures of 5/26.

Bangladesh all-rounder Shakib Al Hasan and Pakistan pacer Mohammad Amir are placed on the second and third spots having registered figures of 5/29 and 5/30 against Afghanistan and Australia respectively.