Opener Rohit Sharma scored a composed unbeaten century as India got their Cricket World Cup campaign off to a solid start with a six-wicket victory over a sloppy South African side at a vibrant Rose Bowl on Wednesday. 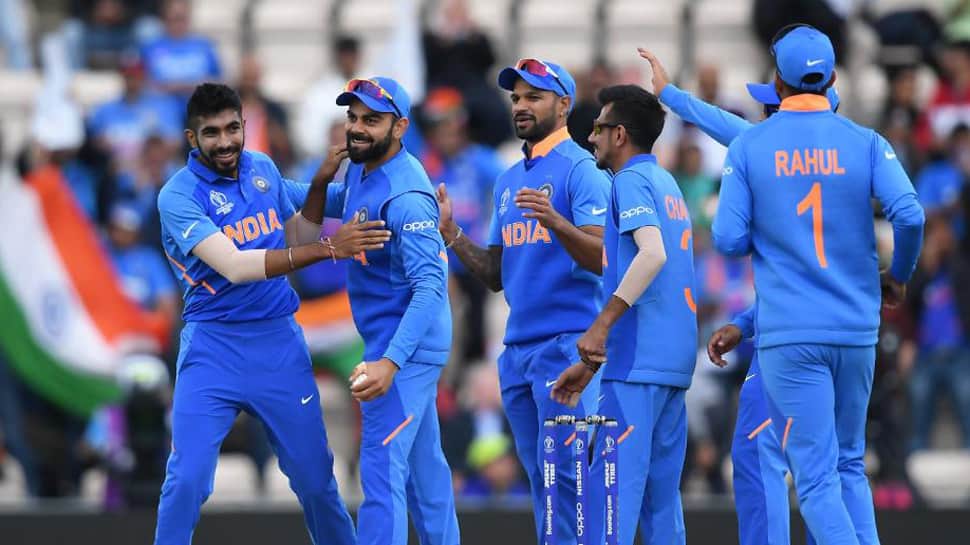 Opener Rohit Sharma scored a composed unbeaten century as India got their Cricket World Cup campaign off to a solid start with a six-wicket victory over a sloppy South African side at a vibrant Rose Bowl on Wednesday.

After winning the toss and electing to bat, South Africa posted a below-par 227 for nine in their 50 overs as wily wrist-spinner Yuzvendra Chahal returned figures of 4-51 following a superb opening burst from seamer Jasprit Bumrah (2-35). (Full Scorecard: India vs South Africa, World Cup 2019)

India were cautious in their reply and the game was in the balance when Virat Kohli (18) was brilliantly caught by wicketkeeper Quinton de Kock with the score on 54 for two in the 16th over.

But Rohit (122 not out from 144 balls) punished the South African bowlers after being dropped on one and scored his 23rd ODI century. (Also Read: Rohit Sharma: Man of the Match in India vs South Africa World Cup 2019 clash)

He attacked South Africa’s leg-spinners Imran Tahir and Tabraiz Shamsi as India reached 230 for four from 47.3 overs, condemning the ailing Proteas to a third successive loss to leave their World Cup hopes in disarray.

"There was something in it for the bowlers throughout and I could not play my natural game," Sharma said at the post-match presentation.

"I had to play close to my body and try and leave as many balls as possible. It was a small target, but we had to build partnerships as there was always something in it for the bowlers.

"I had to play out the overs to make sure the job got done."

Rohit rode some early luck when he was dropped from a difficult chance by Faf du Plessis off the bowling of the unfortunate Kagiso Rabada (2-39).

South Africa created opportunities in the field, but as has been the case throughout the World Cup so far, were uncharacteristically sloppy.

India were able to milk singles through the middle part of the innings, which held the run-rate steady and kept them on course for victory with few alarms.

"It was important to start on the right note," India captain Kohli said. "If you look at how the pitch played, it was challenging, so hats off to Rohit. It was a special innings."

Chahal had earlier restricted South Africa`s total with four wickets, continuing his excellent form against the Proteas in recent years.

Du Plessis (38) and Rassie van der Dussen (22) put on a patient 54 in 80 balls in a bid to rebuild the innings, but after the latter was bowled trying a reverse-sweep off Chahal, wickets fell at regular intervals.

Chris Morris (42) and Rabada (31 not out) put on 66 for the eighth wicket to ensure the side posted a score that at least gave them a chance.

"I thought India were magnificent on a tough pitch. They have spinners through the middle who always get wickets," South Africa captain Du Plessis said.

"Rohit did what we didn`t do, he got a hundred and saw his team through.

"It is a changing room that is hurting. We are trying to make sure we are still fighting, but we keep making mistakes.