Virat Kohli found himself in a Ronaldo-like situation when his pre-WTC final press conference had two more Coke bottles placed right in front of him. 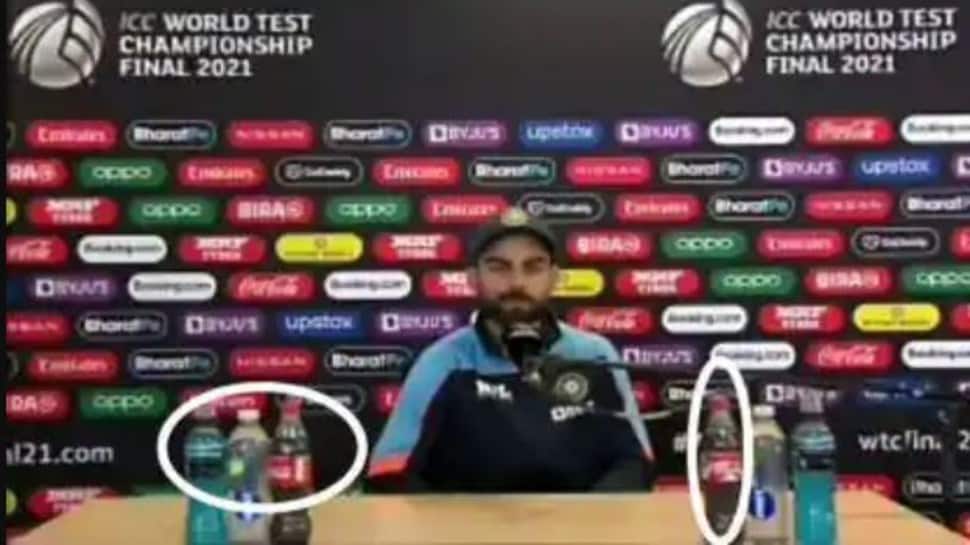 Star footballer Cristiano Ronaldo made headlines when he removed Coca-Cola bottles from the table during his press conference ahead of Portugal’s EURO 2020 opener against Hungary. Ronaldo’s gesture backfired as the beverage manufacturing giants incurred losses. Soon, Ronaldo’s act became the biggest talking point during the ongoing EURO 2020 as players and coaches of other teams – started either emulating CR7’s act or accepting the drink. Seemed like the footballing world got divided into two.

A couple of days back, India captain Virat Kohli, found himself in a similar situation when his pre-WTC final press conference had two more Coke bottles placed right in front of him. But Kohli, who is a big fan of Ronaldo, did not do what the Portuguese icon did and left fans disappointed.

Very disappointed that Virat Kohli didn't remove the Coke bottles from his table and say "paani piyo re" during the presser #WTCFinal pic.twitter.com/sqNWlga8ES

Kohli is a fake Ronaldo fanboy because he still hasn't moved those coke bottles infront of him.

Williamson and Kohli both leave their bottles in place. That's about as exciting as the pre-match pressers have got.

Completely unrelated but what if tomorrow Kohli comes and moves those coke bottles away #WTC21 #INDvNZ https://t.co/VOuulKBALl

Eyes would be on Kohli as he is the premier batsman of the side. The Indian skipper has not smashed a century since 2019 and he is surely due for a big one.

Meanwhile, not a single ball was bowled on the opening day of the inaugural WTC final at Ageas Bowl, Southampton on Friday as rain played spoilsport. The forecast for the rest of the days is of rain which would not be a piece of good news for fans.