The world famous chariot festival or Rath Yatra dedicated to Lord Jagannath, brother Balabhadra and sister Subhadra will begin from July 4 this year. The Puri Jagannath Rath Yatra takes place every year and it's a 15-day long festival. 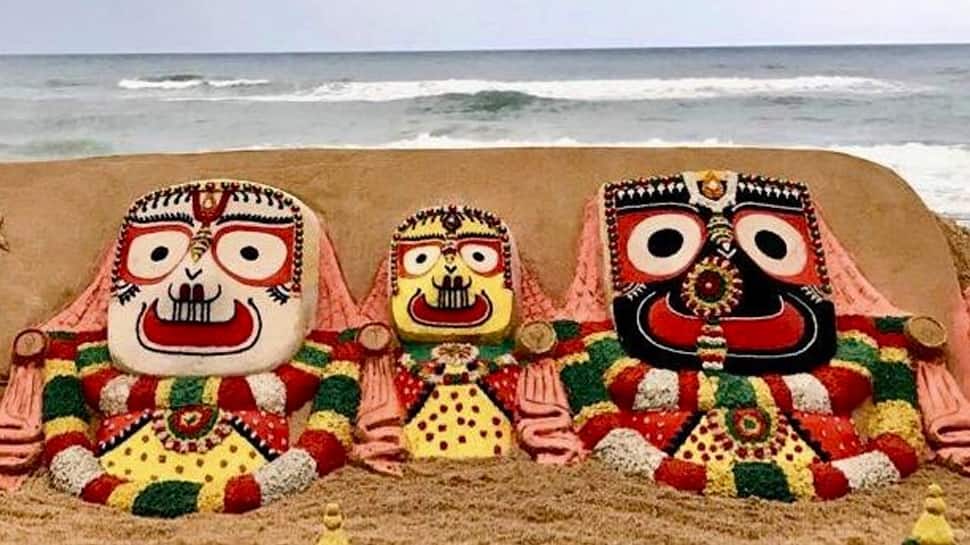 New Delhi: The world famous chariot festival or Rath Yatra dedicated to Lord Jagannath, brother Balabhadra and sister Subhadra will begin from July 4 this year. The Puri Jagannath Rath Yatra takes place every year and it's a 15-day long festival.

The Puri temple preparations for Nabajouban Darshan which happens to be on July 2, 2019, are in full swing. On the day, Lord Jagannath, Lord Balabhadra and Goddess Subhadra were taken to the room after it is believed that they fell ill post taking bath on Snana Purnima.

The deities are then treated by the temple physician for a fortnight, who offers fruits and other items to the holy trinity of Lord Jagannath, Lord Balabhadra and Goddess Subhadra respectively.

Then the deities would give darshan to the devotees with fresh and new energy on Tuesday—the practice is called Nabajouban Darshan.

On the occasion of Nabajouban Darshan, renowned sand artist Sudarsan Pattnaik paid a beautiful tribute to the Lord, his brother and sister.

One of the most important festivals of the Eastern state of India, Odisha attracts millions of devotees thronging the annual chariot procession just to get one glimpse of the Lord.

The Rath Yatra or journey of the chariots has a huge religious significance. During the month of Asadha in June or July, the presiding deities of Lord Jagannath, brother Balabhadra, and sister Subhadra are taken from their Puri temple to Bada Danda and complete the distance of almost 3 km to Shri Gundicha Temple on huge chariots.

While the deities travel on chariots driven by many people, devotees and onlookers pay their obeisance and seek the blessings of the Lord queuing for darshan. The Rath Yatra is also known as the Shri Gundicha Yatra.

Total solar eclipse 2019: India timings and how you can watch it live