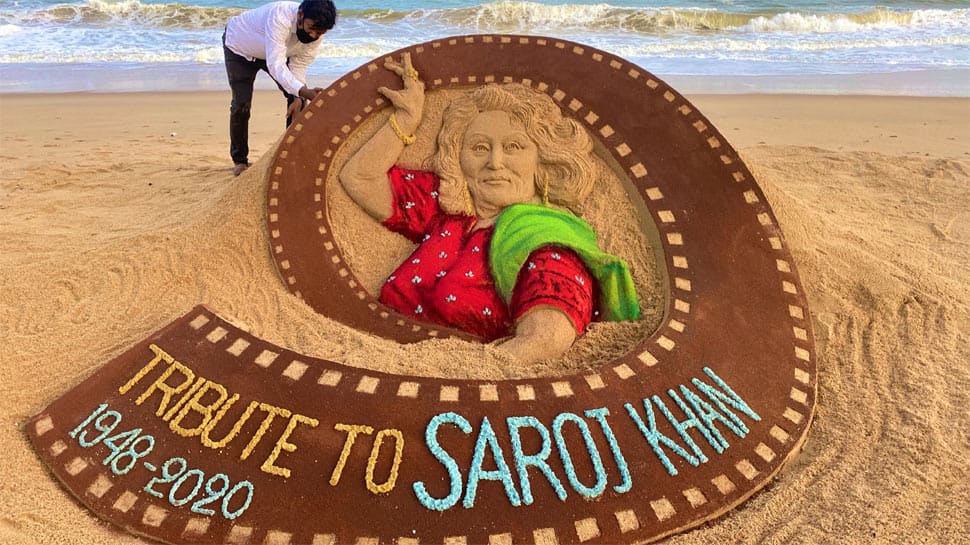 New Delhi: Bollywood's legendary choreographer Saroj Khan left this world on July 3, 2020 (Friday) in the wee hours of 2 am. She was admitted to Guru Nanak Hospital in Bandra, Mumbai since June 20 after she complained of chest pain. Saroj Khan, 71, suffered a cardiac arrest.

Her demise was mourned by one and sundry. From colleagues in the film fraternity, political leaders to fans - everyone condoled the death of Masterji, as she was fondly called.

Noted sand artist from Bhubaneswar, Sudarsan Pattnaik paid a touching sand art tribute to Masterji. He wrote: Saddened to hear the demise of legendary choreographer, #SarojKhan. Deepest condolences to her family & friends. My SandArt at Puri beach in Odisha. #RIPSarojKhan

Saddened to hear the demise of legendary choreographer, #SarojKhan. Deepest condolences to her family & friends. My SandArt at Puri beach in Odisha. #RIPSarojKhan pic.twitter.com/5CLpbjiYzC

The 71-year-old's burial took place in Malad cemetery on Friday morning. She is survived by daughter Sukaina Khan and son Raju Khan.

Her name is synonymous with brilliant choreography and chartbuster songs in the Hindi movie industry. In fact, it was for her great skills that Filmfare actually introduced the 'Best Choreography' category in awards and she won the first one for 'Tezaab'.

Her camaraderie and collaboration with superstar Madhuri Dixit delivered sure shot success. Blockbuster songs like 'Ek Do Teen' in Tezaab, Tamma Tamma Loge in Thanedaar and Dhak Dhak Karne Laga in Beta are a few milestones in her career which helped her emerge as the numero uno choreographer in Bollywood.

Her on-screen and off-screen bonding with Madhuri Dixit resulted in some of the iconic dance moves. Incidentally, her last film 'Kalank' (2019) was with Madhuri for the song 'Tabaah Ho Gaye'.

With her loss, an era of dance has come to an end in Bollywood - a void which can never be filled again.