Thousands take a holy dip at Kumbh on 'Paush Poornima'

Tight security arrangements have been made to ensure smooth passage of the main bathing dates. 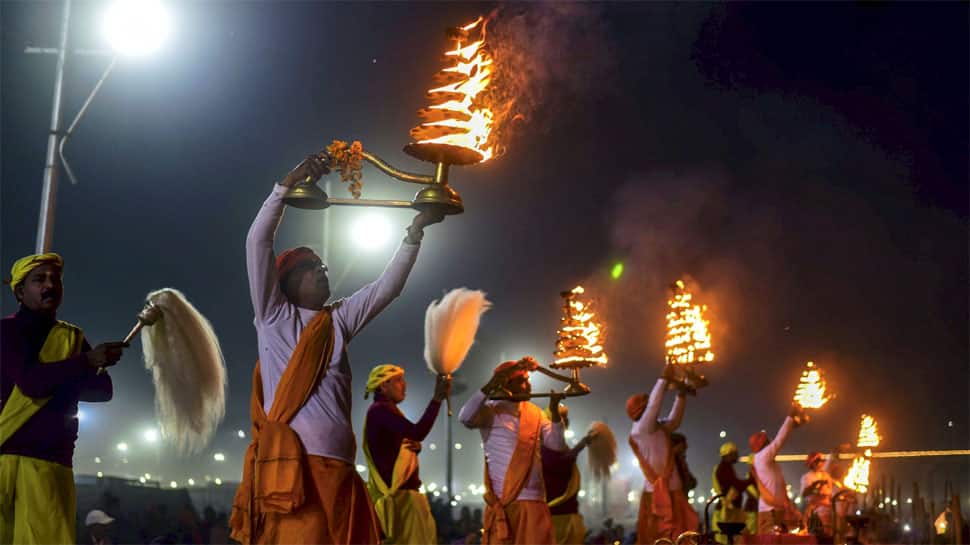 Prayagraj: Hundreds and thousands of pilgrims took a holy dip at the Sangam -- the confluence of the Ganga, Yamuna and mythical Saraswati rivers here in Uttar Pradesh -- on the occasion of 'Paush Poornima' on Monday, officials said.

After the 'Makar Sankranti', which kicked off the mega Kumbh Melaon January 15, this is the second big 'royal bathing' (Shahi Snan) date for the devotees.

Since day break thousands of devotees, including women and even children walked several kilometres of the 'sprawling Kumbhnagar' to make their way to the river and take the holy dip.

Tight security arrangements have been made to ensure smooth passage of the main bathing dates.

While the rituals linked to the 'Paush Poornima' began, based on the astrological charts, on Sunday, the main ritual of bathing and 'daan' began on Monday morning.

From this very day the fabled 'Kalp Vaas' when devotees give up worldly pleasures and connections, for a brief period and live the life of hermits, also began.

Several families have pitched tents here and have begun the 'Kalp Vaas' based on their beliefs of renunciation of the world pleasures, leading a simple life for the period.

During this one month long period, they would be segregated from their families and engage in singing bhajans, chanting hymns, cooking for themselves.

Among other things, during the 'Kalp Vaas', people following it are expected to sleep on the floor, eat one meal a day and thrice take a dip in the holy Ganga. The third 'shahi snaan' (royal bathing) is scheduled for February 4.

Daily Horoscope: Find out what the stars have in store for you today — January 21, 2019