The air quality in Delhi and nearby areas has repeatedly hit dangerous levels after winter started setting in post-Diwali. 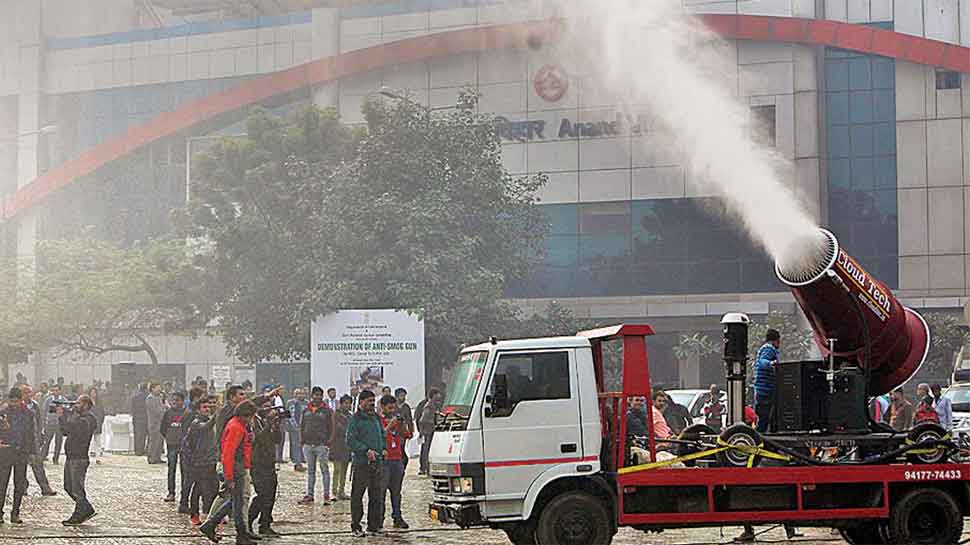 New Delhi: As part of its measure to control pollution, the Delhi government on Saturday directed the Delhi Fire Service to sprinkle water in the national capital. Following the instruction, the fire service department deployed as many as 20 fire tenders at work to spray water on trees and streets in some of the most polluted areas in the capital.

Delhi: Delhi Fire Service has deployed 20 fire tenders to spray water on trees and roads at polluted areas in the city as a measure to control pollution levels. pic.twitter.com/lBHOZgi387

The air quality in Delhi and nearby areas has repeatedly hit dangerous levels after winter started setting in post-Diwali. With wind speed coming down and rampant stubble burning in neighbouring states, the pollution level in Delhi-NCR has seen an alarming rise since last few years, thus forcing the government to close schools and implementation of Odd-Even plan.

In fact, the Delhi pollution remained one of the most severely debated topics in Parliament in the last few days with lawmakers even urging the government of providing incentives to farmers so that they dispose of stubble in a more scientific manner.

Members on Thursday expressed concern over the impact of air pollution on the health of children, with a member stating that he had decided against moving his children to Delhi for studies. The members also referred to ancient Indian texts which talk of living in harmony with nature.

Congress leader Shashi Tharoor said that the National Clean Air Programme (NCAP) launched by the government does not have legal measures "to penalise non-implementers" and said there was a need to bring a legislation to give the program force of law.

Participating in the debate on air pollution in the Lok Sabha, Tharoor called for an action plan, which is courageous, ambitious, technology-based, collaborative and has tough deadlines. Terming pollution as a "national crisis", he said the nation cannot just be concerned about it after Diwali and winter months. Tharoor said he has been holding consultations with experts and civil society members about the toxic air quality.