As monsoon rains pounded the upper reaches, neighbouring Haryana released water from the Hathini Kund dam flooding the homes of those living near the Yamuna`s banks. 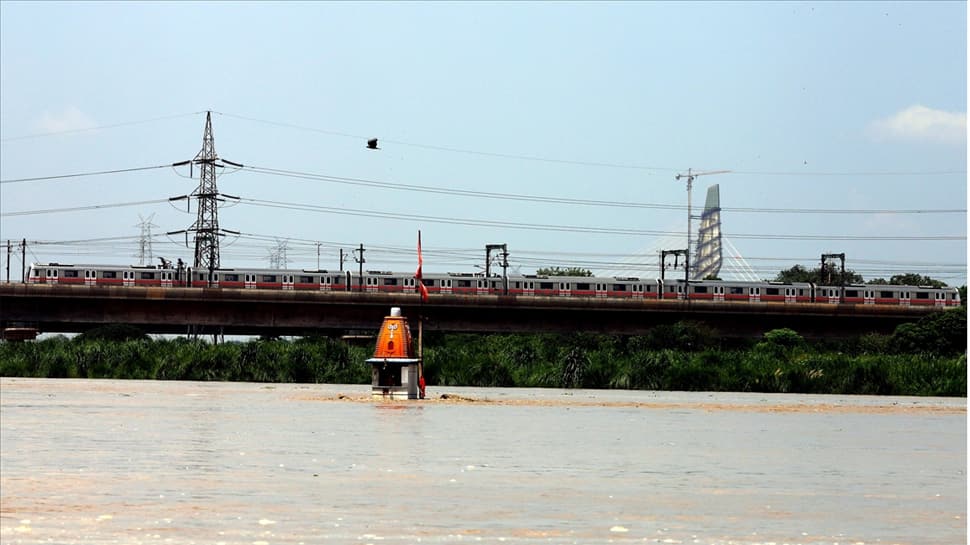 A temple partially submerged in the swollen Yamuna river in New Delhi on August 20, 2019. (Photo: IANS)
Share:
Edited By:

With floodwaters of the Yamuna having swamped their homes, people living on the banks of the swollen river are in despair with many having gone back to their villages, and around 14,000 shifted to relief camps.

As monsoon rains pounded the upper reaches, neighbouring Haryana released water from the Hathini Kund dam flooding the homes of those living near the Yamuna`s banks. The water has been steadily rising since Sunday.

Those who have chosen to stay in relief camps are having to struggle with shifting whatever is left of their belongings to the temporary government shelters.

Several farmers engaged in small-time farming near the Yamuna Khadar and Kisan Colony area in the national capital said they have lost all hopes of earning a livelihood with the rising Yamuna waters destroying their crops.

Devendra Kashyap (32), `pradhan` of Yamuna Khadar area, told IANS that around 200 farmers of the area are dependent on farming.

"There are many families who are dependant on only farming. Now due to the water level rise in Yamuna they have lost their standing green vegetables," said Kashyap.

According to a Delhi government official, close to 14,000 people living in low-lying areas along the Yamuna in Delhi were evacuated till Tuesday noon as the river flows at 206.08 metres and has crossed the danger mark.

The Yamuna is expected to get more water by late Tuesday night or early Wednesday morning, a Flood and Control Department official said.

Several `jhuggis` in Yamuna Khadar and Kisan Colony have been inundated.

The Delhi government has set up 46 relief camps with 2,120 tents having electricity, water, food and toilets across the city.

Several people living in the area have also refused to move to relief camps set up by the Delhi government.

An official present at the site told IANS that people are coming to relief camps but after having their meals they return to their houses which are half-submerged.

"We vacated our houses after the authorities told us about the situation. I had been living for last five years near Old Yamuna Bridge. Due to the sudden rise of the water level we have lost many things in our home which we made with our hard-earned money," Vikram Singh, a farmer, told IANS.

The water discharged from the barrage -- which provides drinking water to Delhi -- normally takes 72 hours to reach the capital, the official said.

Hundreds live along the banks of the Yamuna, and they are being moved to safer places since Sunday.

"Till Tuesday, over 13,635 people from low-lying areas across the city have been shifted and the process is underway. More people will be shifted as we are expecting more water by late Tuesday night," the official added.