Parking scam: AAP demands audit of MCD parking that collapsed within a year

AAP Senior Leader and MLA Atishi said that parking made by MCD collapsed within a year; clear proof of BJP's corruption and it is necessary to investigate which contractor and officer were given the responsibility of construction of the parking and what their link is with BJP leaders. 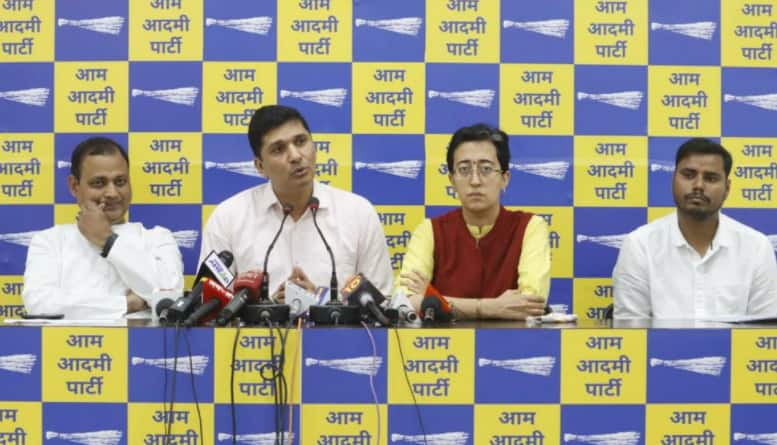 NEW DELHI: The Aam Aadmi Party has demanded an audit of the MCD parking that collapsed within just one year; investigation must take place in the corruption of the BJP and culprits be punished immediately. AAP Chief spokesperson and MLA Saurabh Bhardwaj said that before the Delhi elections, the parking was hurriedly inaugurated by Union Minister Hardeep Puri and the 17 storey parking was made without safety audit in the densely populated area of Green Park; BJP has brought shame to Delhi.

AAP Senior Leader and MLA Atishi said that parking made by MCD collapsed within a year; clear proof of BJP's corruption and it is necessary to investigate which contractor and officer were given the responsibility of construction of the parking and what their link is with BJP leaders.

AAP Senior Leader and MLA Somnath Bharti said that the BJP has a PhD in corruption, shocking that within 1 year the parking made for 19 crores collapsed and an independent SIT under the Supreme Court should conduct a deep investigation of this scam. AAP South MCD LOP Prem Chauhan said that the Delhi BJP State President Adesh Gupta must tell whether BJP was involved in this parking scam.

AAP Chief Spokesperson and MLA Saurabh Bhardwaj said, "Yesterday in the Green Park area, the automated stack parking unit which was established by the South Delhi Municipal Corporation with great enthusiasm, completely collapsed. And it’s important to note that this was such a renowned parking system that it was inaugurated twice, on two different occasions, by two union ministers."

"These days, it’s not a big deal if an MCD building falls or a corruption case is exposed, it’s the norm. But this demands more attention because it was hastily inaugurated right before the Delhi Vidhan Sabha elections by Union Minister Hardeep Singh Puri, back in January 2020. This was just a ploy to show that ‘Hey look, we are also doing something!’ to try and match up to the Kejriwal Government’s exhibition of Mohalla Clinics, revolutionised government schools, stadiums, hospitals, etc. Therefore, out of nowhere just to compete, they carried out the inauguration, for which Minister Hardeep Puri tweeted: ‘This ultra-modern Automated Tower Car Parking facility was inaugurated in Delhi's Green Park area without releasing a Full Page Advertisement! Saaf Niyat Sahi Vikas.’ Then they saved money on advertisement, and now they are getting free advertisement by Aam Aadmi Party, and now the media -- since the advertisement is really what matters to them. This is the condition of ‘Fully Automated World Class’, and if this is ‘Saaf Niyat ka Vikas’ (Progress due to pure motives), then we pray to God to save us from such ‘Niyat’."

"This is blatant corruption. Shopkeepers were forcibly made to shut down stores by warning them of sealing their shops, and it wasn’t MCD’s money that went into all this. Lakhs were collected from them in the name of conversion and parking charges. And then just for the show of the crores of money you have looted from the people of Delhi, you made a spectacle of this ‘modern’ parking, in a place where parking space already existed. Everyone can go to Green Park and see for themselves that there is ample surface level parking right across from where this complex was developed - all a show, all for tokenism or to make a few extra rupees. After the January 2020 inauguration by Hardeep Puri, this hastily made parking complex was inaugurated again in November 2020 by Union Minister RK Singh, Delhi’s LG Anil Baijal, the then BJP MP Meenakshi Negi, and the mayor. Within a few months after which, a part of this tower collapsed. Fortunately, no person was present at the site, for it could’ve been fatal. Many cars were damaged as a result of this," he added.

He concluded, "Many questions arise as a result of this parking complex story: Does the South MCD even have any expertise in building this multi-level stack parking? They should tell us. What was the reason to make this tower in a place where it wasn’t needed? They should tell us. Was there any safety or structural audit done before building a 17-floor structure in the middle of a populated area? Is the tower even strong enough to take the weight of cars? Which agency has audited this complex? Which authorised figure is responsible for the safety and structure of this car park - have those officers been suspended yet? Did the company that audited this building have any action taken against it? It is found that 19 crores were spent in the making of this parking tower, money which belonged to the shopkeepers who were forced to shut down shops. And now they have brought it to a point where no one will want to park their cars in such a fragile parking complex."

"The Delhi BJP President Adesh Gupta himself will not want to park his car. Now everyone is afraid it’ll collapse any time. No one trusts the structure. Moreover, the complex wasn’t even being used properly. Since no one was willing to park there, the surface level parking charges were increased. Despite it being the ‘cheaper’ alternative, we see its condition today. The BJP led MCD has brought great shame to the people of Delhi,” he added.

AAP Senior Leader and MLA Atishi said, "For 15 years, the MCD has had a BJP government. The common people of Delhi are exasperated with the corruption in this BJP-ruled MCD. Every resident of Delhi knows that the MCD does not work on sanitation, building roads in colonies, drainage, parking which it is supposed to do. But when it comes to corruption, you see the MCD and BJP Councillors standing at the front of the line."

She continued, "For the past year, we have been exposing BJP's corruption for all of Delhi to see. The BJP in the MCD has done scams worth thousands of crores; from the scam of dengue medicines to the PF scam. Whatever work was given to the MCD, they did a scam. That platform collapsed in the parking lot of South MCD yesterday stands testimony to the fact that the MCD is corrupt. This parking, built on crores of taxpayers' money, has only been functional for a year. Was this building not supposed to survive even a year?"

She further added, "It is now necessary that an enquiry be set up to look into the people who were given the contract to build this and the officers involved, especially their links to the BJP. There can be no better proof of corruption than a parking structure built at the cost of 17 crores, which the BJP inaugurated twice and termed "world-class, collapsed within a year of its inauguration. The people of Delhi demand to know how much of this amount of 17 crores went into the pockets of BJP politicians. The people of Delhi have already been troubled by the condition of cleanliness."

"The people of Delhi had been plagued by Dengue because the MCD did not do proper fogging. Just like that, the people of Delhi are also troubled by another problem of parking. If you go anywhere in Delhi, the people in that area throw their hands in the air and say how parking is a huge issue, that there are no arrangements for parking in that area. It is the McD's responsibility to arrange this parking. It is clear how the MCD was fulfilling this responsibility, by building parking structures in areas that didn't need them and even these buildings were of such poor quality that within a year, the structure fell apart. Today, we demand that all those who were present at the inauguration of this parking lot, all the BJP mayors, leaders, the UD Minister Hardeep Puri Ji, come forward and answer the questions on corruption. They need to answer why this parking structure could not even last a year."

AAP MLA Somnath Bharti added, “Yesterday, around 5-5:30 PM, I received information about the incident. Immediately, I reached there. I was surprised that a structure so huge, built at the cost of 19 crores, collapsed in a year. How could this happen? All the people who used to park their cars there were astonished by the fact that the section which collapsed was where they'd stand to get their cars out. The BJP was essentially toying with the lives of these people. No leader from the BJP, or an officer from the MCD, reached the spot in the 2 and a half hours I spent there. You must've seen the traffic congestion in the Yusuf Sarai area. We had hoped that with this parking now built, that problem would be solved. However, people don't trust the BJP-ruled MCD and nobody was using the parking structure. As I've said many times before, the BJP has a PhD in corruption and mismanagement. This case is just fresh evidence to show that. This structure, twice-inaugurated and built at the cost of 19 crores, was only half-completed when UD Minister Shri Hardeep Puri inaugurated it on 2nd January 2020. It was then inaugurated again on 25th November 2020. Look at the state of it now. No safety audits, cost audits, or utility audits were done of the building."

According to him, "For the past years, the Aam Aadmi Party has constantly exposed the BJP's corruption and mismanagement, how it has left no stone unturned in turning the MCD into the extremely corrupt department you see today. In the upcoming elections, the people of Delhi will take their revenge. That the culprit is published, the audits be done and the names of BJP leaders involved be made public are our demands. But the question is, who will investigate? The BJP has control over all agencies. In my opinion, a Supreme Court-monitored SIT be set up. There are multiple such structures in Delhi and now the problem is, the people will not trust any of them now. Nobody will park their vehicles there. This is a huge scam that needs to be investigated by an independent body. Only then would the truth be separated from the lie."

AAP LOP in South MCD Prem Chauhan said, "Go to any place in Delhi. Be it Nehru Place, or Green Park, or any other place with surface parking. You'd notice that you won't get the first seat, nor would there be any guidelines on the ground or any security measures for the cars parked there. The money was supposed to be used to strengthen the parking provisions that have already been built. But the BJP forcefully built this type of parking for its personal gains and commissions. Then, when these parking structures weren't successful, they doubled the rates for surface parking so the people had no other option. All we want to know from Adesh Gupta is, was the BJP's part limited to the scams and bribes involved in the construction of this parking structure, or would the BJP come forward today and take responsibility for this incident?"