Sheila Dikshit's mortal remains were taken to her residence and thereafter kept at the Congress headquarters in Delhi for people to pay their last respects. 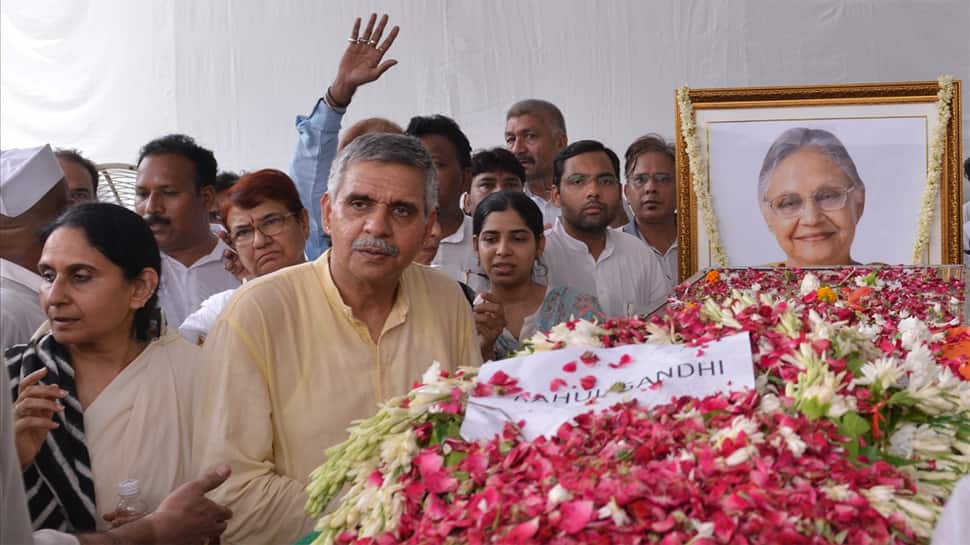 NEW DELHI: Former Delhi Chief Minister Sheila Dikshit was cremated with full state honours in the national capital on Sunday with hundreds chanting her name during her final journey. The veteran Congress leader was admitted to the Fortis Escorts Heart Institute in a critical condition on Saturday morning and died of cardiac arrest at 3:55 pm.

Her mortal remains were taken to her residence and thereafter kept at the Congress headquarters in Delhi for people to pay their last respects. With a smiling photograph in front, her body was taken in a carriage decorated with white flowers for the final procession. Hundreds joined in for the Congress stalwart's last journey from the party headquarters to Nigambodh Ghat.

Dikshit was serving as the Delhi Congress chief at the time of her death. She had unsuccessfully contested the recently held Lok Sabha election from the North East Delhi constituency against BJP's Manoj Tiwari.

She was the longest-serving Congress chief minister of Delhi - ruling uncontested for a period of 15 years from 1998 to 2013. During her illustrious political career that spanned nearly four decades, she even served as the Governor of Kerala.

A 'Congresswoman' for life, Sheila Dikshit made her political debut in 1984 when she successfully contested the Lok Sabha election from Uttar Pradesh's Kannauj parliamentary constituency. She represented the Kannauj constituency from 1984-1989 as a parliamentarian.