The visibility at Delhi airport dropped to 300 metre as AQI in the national capital was recorded at 625 on Sunday. 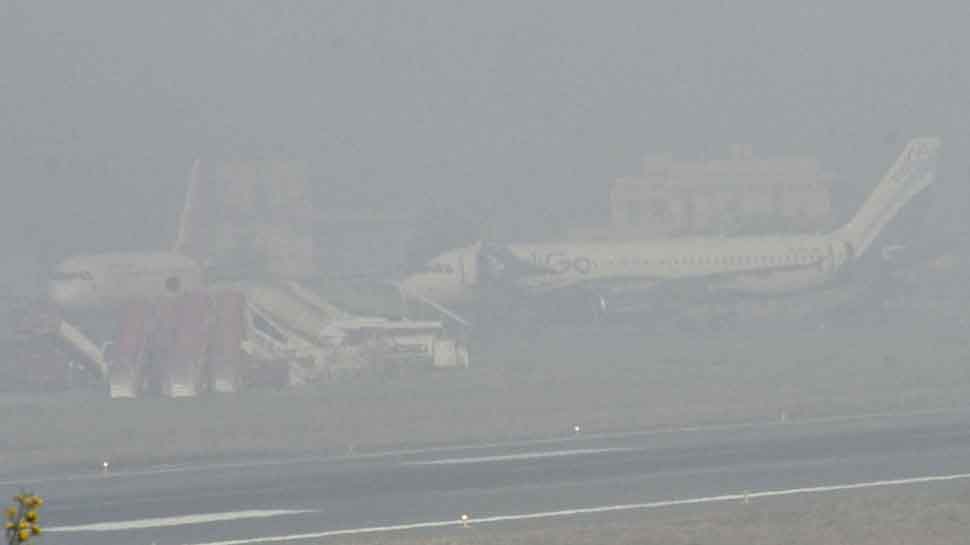 New Delhi: As the air quality worsened after the fresh spell of rains in Delhi and NCR region on Sunday, several flight operations were also affected due to dense smog and low visibility.

The Delhi airport today said that at least 32 flights were diverted due to low visibility and heavy smog in the national capital. "Due to bad weather, flight operations affected since 9 am at Terminal-3 of Delhi Airport. 12 flights have been diverted to Jaipur, Amritsar and Lucknow," an Air India statement said.

In the morning, airlines tweeted to update their passengers about changes in flight schedules. Air India tweeted to say 12 of their flights have been diverted due to "Delhi weather conditions".

Here are the flight details which were diverted:

Air quality in the national capital plummeted post-Diwali, which Delhi Chief Minister Arvind Kejriwal said was the lowest in five years.  On Sunday, Kejriwal urged the Centre to take immediate steps to provide relief to the people. He said his government will support all the initiatives taken by the Centre to control pollution. "Pollution has reached unbearable levels across North India. Delhi government taken many steps. Delhiites have made many sacrifices. Delhi suffering for no fault of theirs. Punjab CM also expressed concern. Centre should take immediate steps to provide relief. We will support Centre in all initiatives," he tweeted.

On Saturday, Delhi deputy Manish Sisodia accused Union Environment Minister Prakash Javadekar of postponing meetings with state environment ministers thrice -- on September 12, October 17 and on October 19 -- saying either he has no time for the pollution in the national capital.

The AAP government in Delhi is implementing the road rationing odd-even scheme from November 4-15 under which vehicles with odd and even number plates will ply on odd and even days of the week.

The pollution in the National Capital Region was declared a public health emergency on Friday by the Environment Pollution (Prevention & Control) Authority after pollution levels entered into the "emergency" category for the first time since January.