The Economic Survey has forecast India's real GDP to record a growth of 11 per cent in 2021-22 and nominal GDP by 15.4 per cent-the highest since independence, believing that rebound will be led by the low base and continued normalization in economic activities as the rollout of COVID-19 vaccines gathers traction. 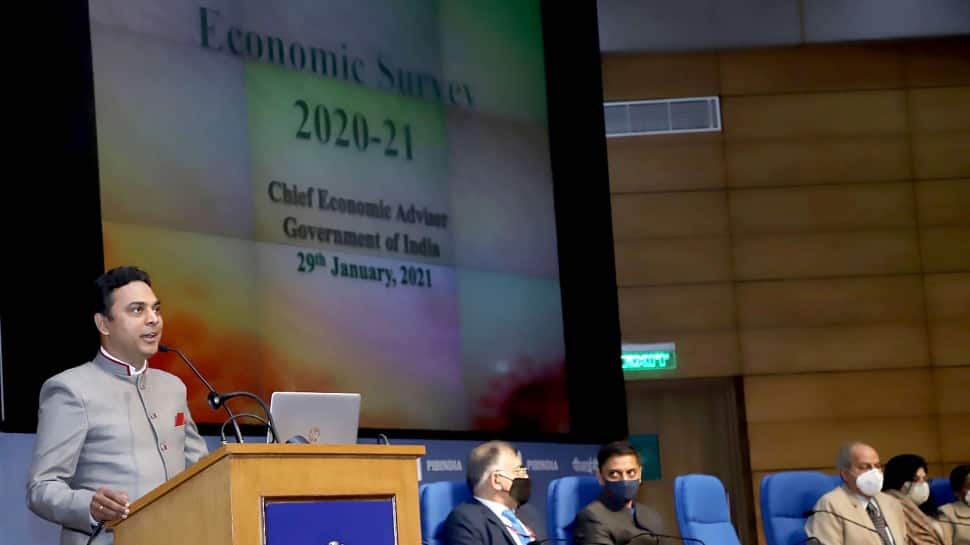 New Delhi: Union Minister for Finance and Corporate Affairs Nirmala Sitharaman presented the Economic Survey 2020-21 in the Parliament on Friday.

The Economic Survey has forecast India's real GDP to record a growth of 11 per cent in 2021-22 and nominal GDP by 15.4 per cent-the highest since independence, believing that rebound will be led by the low base and continued normalization in economic activities as the rollout of COVID-19 vaccines gathers traction.

"This path would entail a growth in real GDP by 2.4 per cent over the absolute level of 2019-20-implying that the economy would take two years to reach and go past the pre-pandemic level. These projections are in line with IMF estimate of real GDP growth of 11.5 per cent in 2021-22 for India and 6.8 per cent in 2022-23. India is expected to emerge as the fastest growing economy in the next two years as per IMF," the Survey said.

Here are the key highlights of the Economic Survey 2020-21:

- GDP growth will recover from the temporary shock caused by the coronavirus pandemic.

- An early, intense lockdown provided a win-win strategy to save lives, and preserve livelihoods via economic recovery in the medium to long-term.

- Strategy also motivated by the Nobel-Prize winning research by Hansen & Sargent (2001): a policy focused on minimizing losses in a worst-case scenario when uncertainty is very high.

- India’s strategy flattened the curve, pushed the peak to September 2020.

- After the September peak, India has been unique in experiencing declining daily cases despite increasing mobility.

- V-shaped recovery, as seen in 7.5% decline in GDP in Q2 and recovery across all key economic indicators vis-à-vis the 23.9% GDP contraction in Q1.

- Rebound to be led by a low base and continued normalization in economic activities as the rollout of COVID-19 vaccines gathers traction.

- The recovery in the second half of FY2020-21 is expected to be powered by government consumption, estimated to grow at 17% YoY.

- India expected to have a Current Account Surplus of 2% of GDP in FY21, a historic high after 17 years.

- Agriculture set to cushion the shock of the COVID-19 pandemic on the Indian economy in FY21 with a growth of 3.4%.

- Industry and services estimated to contract by 9.6% and 8.8% respectively during FY21.

- India was the only country among emerging markets to receive equity FII inflows in 2020.

- Buoyant SENSEX and NIFTY resulted in India’s market-cap to GDP ratio crossing 100% for the first time since October 2010.

- The external sector provided an effective cushion to growth with India recording a Current Account Surplus of 3.1% of GDP in the first half of FY21.

- Forex reserves increased to a level so as to cover 18 months worth of imports in December 2020.

- Ratio of forex reserves to total and short-term debt improved because of the sizable accretion in reserves.

- India became the fastest country to roll-out 10 lakh vaccines in 6 days and also emerged as a leading supplier of the vaccine to neighbouring countries and Brazil.

- India experiencing a Current Account Surplus along with robust capital inflows leading to a BoP surplus since Q4 of FY2019-20.

- Net FPI inflows of US$ 28.5 billion during April-December, 2020 as against US$ 12.3 billion in the corresponding period of last year.