Wheat procurement target has been set at 40.7 million tonnes (MT) for the 2020-21 marketing year. Although the wheat marketing year runs from April-March, the bulk of procurement is normally done in the first three months. 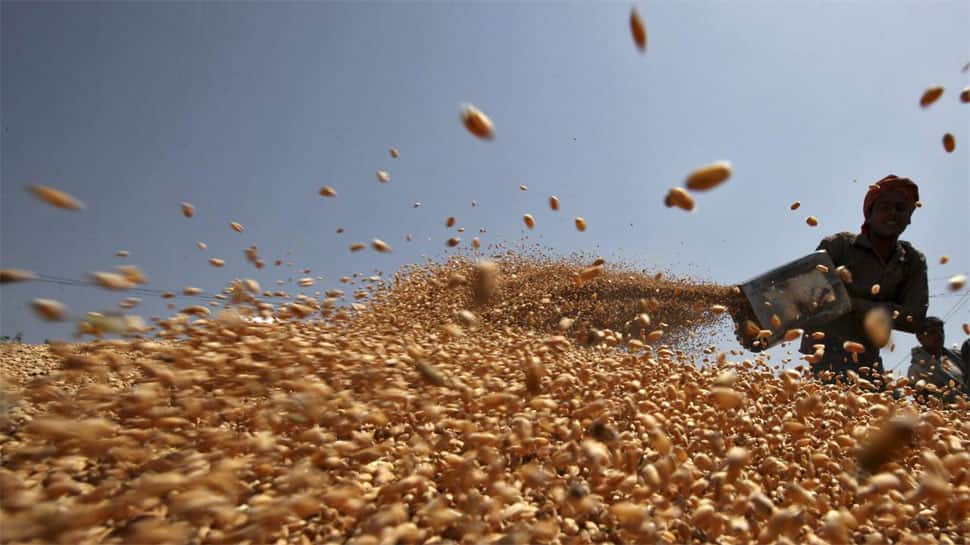 New Delhi: The government's wheat procurement in 2020-21 (May 24, 2020) marketing year has surpassed the last year's 34.13 million tonnes, despite all the hurdles in the wake of the COVID-19 outbreak, official data showed on Monday.

Wheat harvesting generally starts towards end of March and procurement commences in the first week of April every year. However, with the imposition of national lockdown with effect from midnight of   24&25.03.2020, all operations came to a standstill. The crop had ripened by then and was ready for harvesting, an official release said.

In a statement, the food ministry, "Procurement of wheat by the government agencies surpassed last year’s figures of 341.31Lakh Metric Tonnes (LMT) to touch 341.56LMT on 24.05.2020, surmounting all impediments created due to the spread of COVID-19 virus and the country wide lockdown".

The Union Agriculture Ministry in its third estimate has pegged wheat output to reach an all-time record level of 107.18 MT in the 2019-20 crop year (July-June) as against 103.60 MT in the previous year.

In addition to the threat of spread of virus, there were 3 major challenges faced by the procuring agencies in wheat procurement. As all the Jute mills were closed, production of Jute bags used for filling of procured wheat stopped, creating a major crisis. This was tackled by using more plastic bags, supplemented by used bags with very strict quality conditions. Through continuous monitoring and timely actions, it could be ensured that the procurement was not stopped due to lack of packaging materials anywhere in the country.

There were unseasonal rains in all the major producing states leading to wheat getting exposed to water. This posed a major threat to the farmers as such stocks could not be procured under normal specifications. Government of India and Food Corporation of India (FCI) intervened immediately and after conducting detailed scientific analysis, specifications were re-fixed to ensure that no farmer is put to distress while making sure that the produce so procured meets the minimum quality requirements of the consumers.

Third challenge was the tight labour supply position as well as the general fear created among the masses about the virus. This was addressed by taking a series of confidence building measures at the local level by the state administration. Labour was provided with adequate protection safety gears like masks, sanitizers etc. and other precautionary measures were also taken to ensure their safety.