Goyal made it clear that the government is going all out to secure its electoral fortunes. 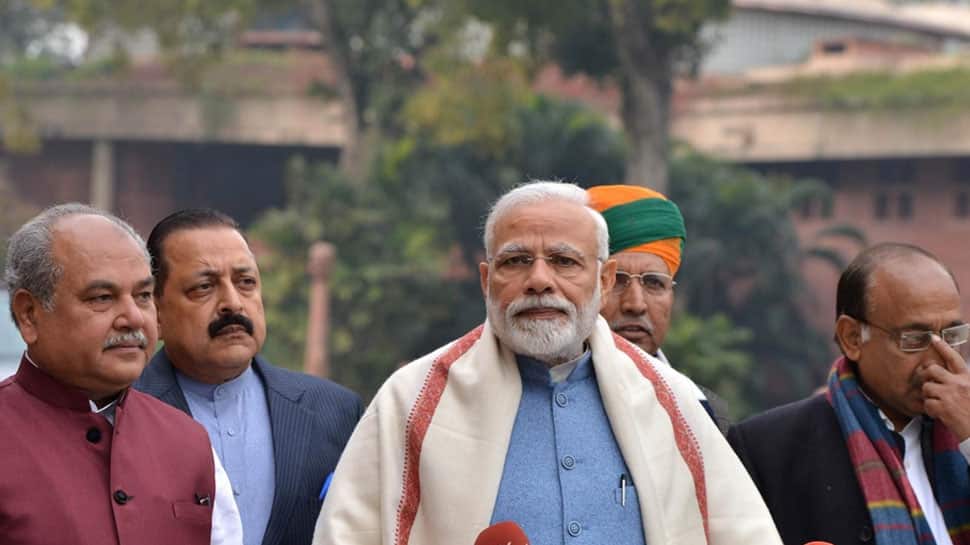 Prime Minister Narendra Modi-led government has sounded the bugle for the upcoming Lok Sabha election loud and clear in the Interim Budget 2019-20 presented by Finance Minister Piyush Goyal on Friday. Announcing a host of welfare schemes for the poor farmers, those employed in the unorganised sectors and an income tax sop for the middle class, Goyal made it clear that the government is going all out to secure its electoral fortunes.

With the confidence of getting re-elected in the Lok Sabha election 2019, the Bharatiya Janata Party-led National Democratic Alliance (NDA) government's Interim Budget had a host of populist measured including direct income support for almost 12 crore small and marginal farmers with land holding of up to 2 hectares, pension initiative for over 10 crore unorganised sector workers, income tax rebate for those earning up to Rs 5 lakh per annum, along with higher budgetary allocations for social sectors like education, health, infrastructure and for the welfare of weaker sections including Scheduled Castes and Scheduled Tribes, and a separate Department of Fisheries for the welfare of 1.5 crore fishermen and women.

Goyal said the government will provide direct income support at the rate of Rs 6,000 per year to farmers having cultivable land up to 2 hectares under a new scheme 'Pradhan Mantri Kisan Samman Nidhi (PM-KISAN)'. The amount of Rs 6,000 will be transferred in three equal instalments of Rs 2,000 each during each fiscal. He said that PM-KISAN is effective from December 1, 2018, and the first installment for the period up to March 31, 2019, would be paid during this year itself which will cost the exchequer Rs 20,000 in the 2018-19 fiscal and Rs 75,000 crore in the next fiscal.

While emphasising that India under the NDA government was the fastest growing big economy, the Finance Minister also announced a mega pension scheme called 'Pradhan Mantri Shram-Yogi Maandhan' for over 10 crore people working in the unorganised sector. The Finance Minister said that within the next five years it would be one of the largest pension schemes of the world. A sum of Rs 500 crore has been allocated for the scheme and additional funds will be provided as needed. Pradhan Mantri Shram-Yogi Maandhan will be implemented from the current year.

Seeking to address concerns over farm distress, the finance minister said the government has taken a "historic" decision to fix the minimum support price (MSP) of 22 notified crops at least 1.5 times of production cost.

"The poor have the first right on the resources of the nation. The Government while maintaining the existing reservation for SC/ST/Other Backward Classes, have now ensured 10% reservation in educational institutions and Government services for poor. In these institutions, around 25% extra seats (approximately 2 lakh) will be provided so that, there is no shortfall of presently available/reserved seats for any class," he said. The government has already announced reservation of 10 per cent in jobs and employment for the poorer section from the forward castes.

He also highlighted that the government spent almost Rs 1,70,000 crore to ensure foodgrains at affordable prices to the poor and middle classes, which was almost twice of Rs 92,000 crore spent in 2013-14 by the previous Congress-led United Progressive Alliance (UPA) government. "Rs 60,000 crores are being allocated for Mahatma Gandhi National Rural Employment Guarantee Act (MGNREGA) in 2019-20. Additional amount would be provided if required," he added.

Keeping the focus of social changes, Goyal said as a tribute to Mahatma Gandhi’s 150th birth anniversary in 2019, the NDA government initiated the world’s largest behavioural change movement with the Swachh Bharat Mission. "India has achieved 98% rural sanitation coverage and as many as 5.45 lakh villages have been declared Open Defecation Free."

Infrastructure in rural areas has improved with the pace of construction of rural roads tripling in the last five years while 1.53 crore houses have been constructed under Pradhan Mantri Awas Yojana during 2014-18. Pradhan Mantri Gram Sadak Yojana (PMGSY) has been allocated Rs 19,000 crore in 2019-20 as against Rs 15,500 crore in 2018-19.

Wooing the over 3-crore income taxpayers which include the salaried class, pensioners, self- employed and small businesses, Goyal gave a rebate to those earning up to Rs 5 lakh per year by doubling the exemption limit from the present Rs 2.5 lakh per annum. Taxpayers will be able to save up to Rs 18,500 crore annually after this announcement. Standard deduction, too, has been raised to Rs 50,000 from current Rs 40,000 along with another sop of increase in tax deduction at source (TDS) threshold on interest from bank and post office deposits from Rs 10,000 to Rs 40,000.

But there is no change in the existing tax slab for 2019-20 fiscal which means that 20 per cent tax will be levied on income between Rs 5 lakh and Rs 10 lakh and 30 per cent tax on earnings of over Rs 10 lakh.

To revive the realty sector, Goyal announced that capital gains of up to Rs 2 crore made from the sale of an immovable property can now be invested in two residential houses as against the current practice of exempting such income if invested in one house within a year. But such an investment can be made by the taxpayer only once in his or her lifetime. Those having rental income too have something to cheer for as the TDS threshold for deduction of tax on rent is now Rs 2.4 lakh, up from the current Rs 1.8 lakh.

The cow is another focus area with Goyal allocating Rs 750 crore for Rashtriya Gokul Mission and announcing "Rashtriya Kamdhenu Aayog" to upscale sustainable genetic upgradation of cow resources and to enhance production and productivity of the bovine.

Lauding the Modi government, Goyal said the stable and predictable regulatory regime resulted in a growing economy and strong fundamentals which led to India attracting a massive $239 billion of Foreign Direct Investment (FDI) during the last five years when most of the FDI was allowed to come in through the automatic route.

Goyal gave details of non-performing loans (NPA) and pointed out that Rs 3 lakh crore has been recovered by banks and creditors after the Insolvency and Bankruptcy Code came into effect while recapitalisation of banks amounting to Rs 2.6 lakh crore has also been done.