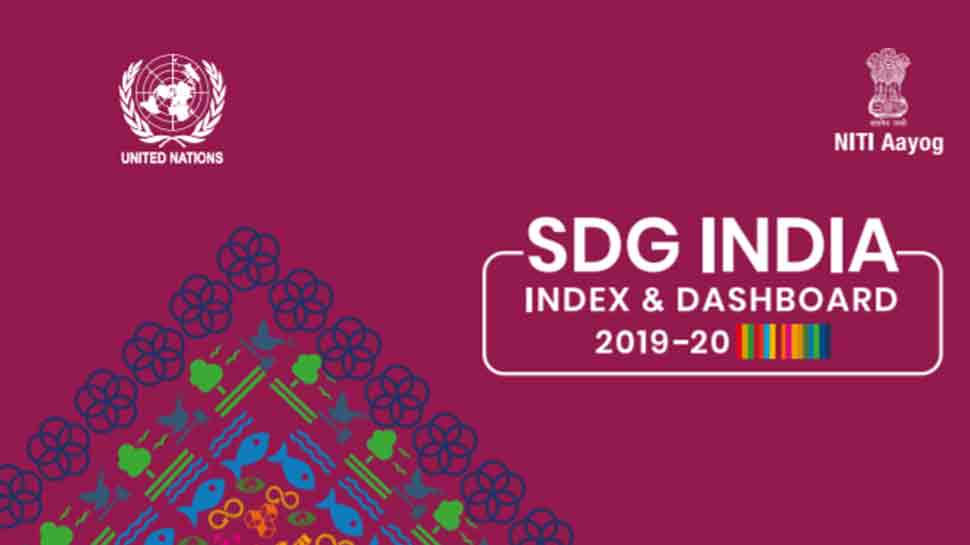 New Delhi: NITI Aayog has released the second edition of Sustainable Development Goals (SDG) India Index documenting the progress made by states and union territories towards achieving the 2030 SDG targets. The Index has been developed in collaboration with the Ministry of Statistics and Programme Implementation (MoSPI), United Nations in India and Global Green Growth Institute.

According to  SDG India Index, the nation has improved three points from 57 points last year to 60 this year, slowly inching towards the fulfillment of the SDGs. The top-ranked states are Kerala and Himachal Pradesh, while the top-ranked UTs are Chandigarh and Puducherry.

Himachal Pradesh took the second spot while Andhra Pradesh, Tamil Nadu, and Telangana shared the third spot on the table, respectively. While three out of five states in the top three spots perform
equal to or better than the country average on 12 goals, the other two States do the same on 11 goals.

However, the composite score for India improved, from 57 in 2018 to 60 in 2019. This indicates that the country overall has progressed forward in its journey towards achieving the SDGs. Five goals drive the positive push – 6 (clean water and sanitation), 7 (affordable and clean energy), 9 (industry, innovation, and infrastructure), 15 (life on land), and 16 (peace, justice, and strong institutions), where India has scored between 65 and 99.

In the other eight goals (excluding 14 – life below water, which applies only to 9 coastal States, and 17 – partnerships for the goals, which is qualitatively analysed), the overall score lies between 50 and 64, including both, indicating the scope for significant improvement in the coming years.

While in 2018, three states belonged to the category of aspirants with a score of less than 50, none of the states or UTs found themselves in this category in 2019. Assam, Bihar, and Uttar Pradesh graduated to the category of performers (scores between 50 and 64, including both).

India has improved three points from 57 points last year to 60 this year, slowly inching towards the fulfillment of #SDGs!

Only three states were placed in the category of Front Runners (with a score in the range 65-99, including both) in 2018 – Himachal Pradesh, Kerala, and Tamil Nadu. In 2019, five more states joined this league – Andhra Pradesh, Telangana, Karnataka, Sikkim and Goa, taking the total tally to eight.

While all but five states/ UTs improved or retained their overall composite score from 2018 to 2019, the magnitude of change has been varied. The top three states in overall improvement deserve special mention.

Uttar Pradesh has improved its overall score from 42 in 2018 to 55 in 2019, and is the highest gainer. The biggest improvement has been in goal 7 – affordable and clean energy, where the jump has been by 40 points. Scores in goal 6 – clean water and sanitation and goal 9 – industry, innovation, and infrastructure, have climbed by 39 and 34 points, respectively.

Sikkim is the third-best State in overall improvement: from a score of 58 to that of 65, indicating an increase by 7 points. The state has achieved commendable improvement in goal 7 where it has recorded an increase by 55 points. In goal 9, Sikkim has made a jump of 26 points. Performance in goal 11 – sustainable cities and communities, has been by 18 points, which is the third biggest contributor to Sikkim’s improvement.

The significant improvement in goal 6 is largely driven by the success of the Swachh Bharat Abhiyaan in eliminating open defecation. Improvement in goal 7 can be credited to the extensive coverage of LPG for households and saturation of electricity connections. The progress recorded under goal 9 can be largely attributed to the improvement in rural road coverage, and higher mobile and internet penetration.

India's core sector growth contracts in November by 1.5 per cent