Nirmala Sitharaman proposed lower 25% corporate tax rate to be applicable to those with annual turnover up to Rs 400 crore instead of the current limit of Rs 250 crore. 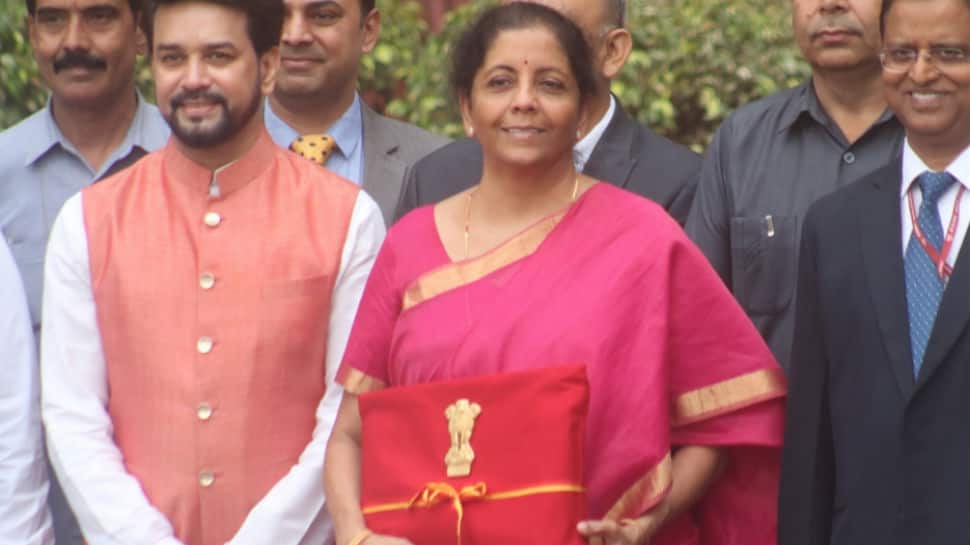 New Delhi: Presenting the Union Budget 2019-20 in the Parliament, Finance Minister Nirmala Sitharaman laid stress on the aim to promote investments in start-ups and sunrise industries through the tax proposals she announced.

Sitharaman proposed lower 25% corporate tax rate to be applicable to those with annual turnover up to Rs 400 crore instead of the current limit of Rs 250 crore.

"To resolve the so-called 'angel tax' issue, the start-ups and their investors who file requisite declarations and provide information in their returns will not be subjected to any kind of scrutiny in respect of valuations of share premiums. The issue of establishing the identity of the investor and source of his funds will be resolved by putting in place a mechanism of e-verification," she said.

"With this, the funds raised by start-ups will not require any kind of scrutiny from the Income Tax Department.  Special administrative arrangements shall be made by CBDT for pending assessments of start-ups and redressal of their grievances. No inquiry or verification in such cases can be carried out by the Assessing Officer without obtaining approval of his supervisory officer," Sitharaman added.

Several of the tax proposals announced by Sitharaman, while presenting the Union Budget 2019-20 in Parliament today, are aimed at promoting investments in Sunrise Advanced Technology industries and in start-ups. To boost  economic growth and Make in India, a Scheme is to be launched to invite global companies through a transparent competitive bidding to set up mega-manufacturing plants  in sunrise and advanced technology areas such as Semi-conductor Fabrication  (FAB), Solar Photo Voltaic cells, Lithium storage batteries, Solar electric charging infrastructure, Computer Servers, Laptops, etc. Such global companies are to give investment linked income tax exemptions under Section 35 AD of the Income Tax Act, and other indirect tax benefits.

Start-ups will not be required to justify fair market value of their shares issued to Category-II Alternative Investment Funds also. Valuation of shares issued to these funds shall be beyond the scope of income tax scrutiny. She said it is also proposed to relax some of the conditions for carry forward and set off of losses in the case of start-ups. It is also proposed to extend the period of exemption of capital gains arising from sale of residential house for investment in start-ups up to March, 2021.

Affordable housing gets further encouragement in the form of additional tax deduction of Rs.1.5 lakh beyond Rs. 2 lakh of interest paid on loans borrowed upto 31st March, 2020 for purchase of an affordable house valued up to Rs. 45 lakh. The Finance Minister said “thus a person purchasing an affordable house will now get an enhanced interest deduction up to Rs. 3.5 lakh. This will translate into a benefit of around Rs 7 lakh to the middle-class home-buyers over their loan period of 15 years.”

Expressing thanks to the taxpayer, including self-employed, small traders, salary earners and senior citizens, Smt. Sitharaman said that “the direct tax revenue has significantly increased over the past couple of years. It has increased by over 78% from Rs 6.38 lakh crore in Financial Year 2013-14 to around Rs 11.37 lakh crore in Financial Year 2018-19. It is now growing at double-digit rate every year.”

Saying that those in the highest income brackets need to contribute more to the nation’s development and for revenue mobilization, the Finance Minister announced the enhancement of surcharge of 3% on individuals having taxable income from  Rs 2 crore to Rs 5 crore and  7% for those with taxable income of Rs 5 crore and above.

At the same time, several measures are announced to leverage technology to make tax administration and tax payment easier.  Those without Pan Card are now allowed to file income tax returns by quoting their Aadhar number.

Pre-filled tax returns would be made available to taxpayers with details of salary income, capital gains from securities, bank interests, and dividends and tax deductions, etc. Information regarding these incomes will be collected from the concerned sources such as Banks, Stock exchanges, mutual funds, EPFO, State Registration Departments etc.

A Scheme of Faceless Assessment in electronic mode involving no human interface is being launched this year in a phased manner. To start with, such e-assessments shall be carried out in cases requiring verification of certain specified transactions or discrepancies. Cases selected for scrutiny shall be allocated to assessment units in a random manner and notices shall be issued electronically by a Central Cell, without disclosing the name, designation or location of the Assessing Officer. The Central Cell shall be the single point of contact between the taxpayer and the Department.

To further encourage digital payments practices in the country or discourage cash payments, the Finance Minister announced several measures which include discouraging the practice of making business payments in cash, proposal to levy TDS of 2% on cash withdrawal exceeding Rs 1 crore in a year from a bank account. Business establishments with annual turnover more than Rs 50 crore shall offer low cost digital modes of payment to their customers and no charges or Merchant Discount Rate is to be imposed on customers as well as merchants. RBI and Banks will absorb these costs from the savings that will accrue to them on account of handling less cash as people move to these digital modes of payment. Necessary amendments are being made in the Income Tax Act and the Payments and Settlement Systems Act, 2007 to give effect to these provisions.

For the promotion of electric vehicles in a big way in the country, both direct and indirect tax incentives are announced.  The Finance Minister said, “Considering India’s large consumer base, we  aim to envision  India as a global hub of manufacturing of Electric Vehicles”.  Inclusion of Solar storage batteries and charging infrastructure in the above Scheme will boost our efforts, she said. The Finance Minister announced that the “Government has already moved GST Council to lower the GST rate on electric vehicles from 12% to 5%. Also to make electric vehicle affordable to consumers, our Government will provide additional income tax deduction of Rs 1.5 lakh on the interest paid on loans taken to purchase electric vehicles. This amounts to a benefit of around Rs 2.5 lakh over the loan period to the taxpayers who take loans to purchase an electric vehicle”.

To provide level playing field to domestic industry,  custom duties are enhanced on 36 items including :

To encourage export of sports goods, certain items to a certain limit, like foam and pinewood are included in the list of items allowed for duty free import.  Similarly, “Export duty is being rationalised on raw and semi-finished leather to provide relief to this sector’ the Minister said.

The Minister said “Defence has an immediate requirement of modernisation and upgradation. This is national priority. For this purpose, import of defence equipment that are not being manufactured in India are being exempted from the basic customs duty.”

While stating that with introduction of GST, 17 taxes and 13 cesses have become one tax, it also led to transformation of operations wherein a transport truck has started doing two trips in the same time that it was doing one with simplification of operations.  She said reduction of GST rates have led to relief of about 92,000 crore rupees per annum.

The Finance Minister stated that free accounting software for preparation of tax returns is being made available to small businesses and a fully automated GST refund module is expected to be implemented soon.  She said taxpayer with an annual turnover of less than 5 crores is to file quarterly returns.  Electronic invoice details are to be captured in a central system to enable pre-filled taxpayer returns and a simultaneous e-way bill to be generated.  These are expected to begin from January 2020 reducing the compliance burden significantly.

The Minister proposed a “Legacy Dispute Resolution Scheme that will allow quick closure of litigations.”  She said “more than 3.75 lakh crore rupees is blocked in litigations in service tax and excise duties from pre-GST regime.” She urged the trade and business to avail this opportunity of dispute resolution scheme to be called as Sabka Vishwas Legacy Dispute Resolution Scheme, 2019.  This scheme is to be notified in due course allows persons discharged under it not liable for prosecution.

The Minister also proposed certain amendments to the Customs Act to prevent certain bogus entities from resorting to unfair practices to benefit from export incentives.  Provisions to make violations involving duty-free scripts and drawback facility of over 50 lakh rupees cognizable and non-bailable offence are being made in the Customs Act. The amendment to the Customs Act, 1962 proposes to introduce provision for verification of Aadhar or any other identity to prevent smuggling. It also empowers customs authorities to arrest a person who has committed an offence outside India.

A provision for allowing all Non-Banking Financial Companies to avail the facility of offering the interest to be taxed in the year in which it is actually received like in the case of Scheduled Banks is to be made.  This was announced by the Finance Minister in her Budget Speech today.

Several direct tax incentives including 100% profit-linked deduction under Section 80-LA in any ten-year block within a fifteen-year period has been announced for the International Financial Services Centre (IFSC) in GIFT City.  “Exemption from dividend distribution tax from current and accumulated income to companies and mutual funds, exemptions on capital gain to Category-III Alternative Investment Funds (AIF) and interest payment on loan taken from non-residents”, have also been announced for IFSC.

The Finance Minister said as National Calamity and Contingent duty is contested with regard to tobacco products and crude as there is no basic excise duty on these items, a nominal basic excise duty is now proposed to be imposed.  Rates for such basic excise duties have been announced as set forth in the Fourth Schedule to the Central Excise Act, 1944.