FM Nirmala Sitharaman on Friday said that the Union Budget 2019 envisions a 'New India' and aims to make the country a USD 5 trilion economy. 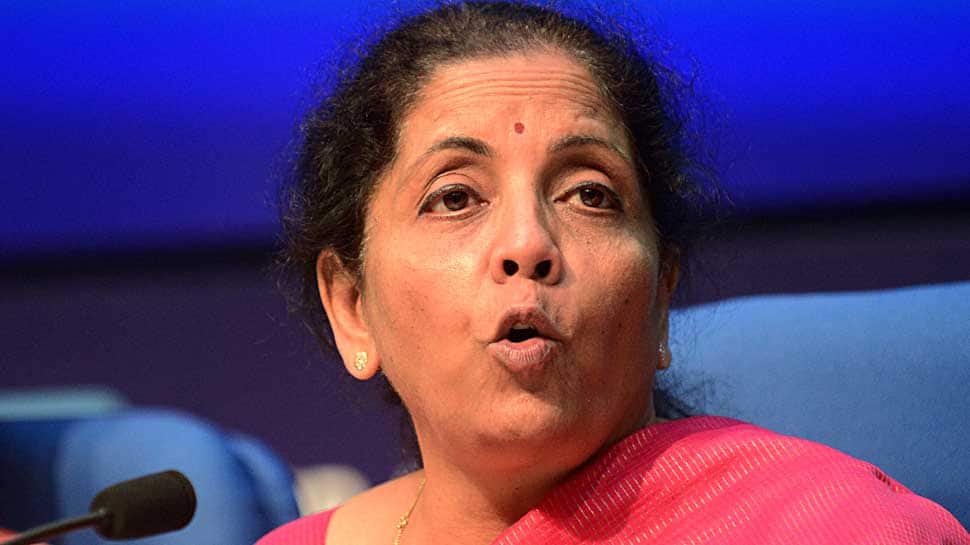 NEW DELHI: Union Finance Minister Nirmala Sitharaman, who presented her maiden budget in the Parliament on Friday, said that the Union Budget 2019-20 aims at making India a USD 5 trillion economy and has provisions for inclusive growth of almost all sectors.

In an exclusive interview with Zee Business Executive Editor Swati Khandelwal, the Finance Minister outlined the main provisions and proposals of the Union Budget 2019, which the ruling BJP and the India Inc hailed as ''a path-breaking, inclusive, historic and futuristic budget''.

The FM said that revenue collection has gone up and the government has lowered the fiscal deficit target for 2019-20 to 3.3 per cent of the gross domestic product in the Union Budget.

"Fiscal deficit is lowered to 3.3 per cent (from earlier 3.4 per cent)," Finance Minister Nirmala Sitharaman said during her exclusive conversation with Zee Business.

"FY21 and FY 22 fiscal deficit targets retained at 3 per cent," She said adding that the ''fiscal deficit touched 52 per cent of the budget estimate for the full year in the first two months of 2019-20.''

The Finance Minister Nirmala Sitharaman also expressed confidence that India will become a USD 5 trillion economy in the financial year 2019-2020, though many structural changes are needed for the country to achieve that feat. She, however, said that the target is eminently achievable.

It may be recalled that the Economic Survey for 2018-19 released on Thursday also set out a vision for the country to reach the landmark level of USD 5 trillion economy by the year 2024-25. It said that to achieve that target India will have to grow at the rate of 8 per cent per year.

The FM said that the direct tax revenue has significantly increased by over 78 per cent from Rs 6.38 lakh crore in 2013-14 to about Rs 11.37 lakh crore in the last five years.

The increase has been significant in the last couple of years due to slew of efforts taken by the government, she said.

While thanking millions of honest taxpayers, the FM said their number has also increased by 48 per cent over the period 2013-14 to 2017-18 - from 5.71 crore taxpayers to 8.4 crore taxpayers - due to various initiatives and taxpayer outreach programmes.

FM Sitharaman also mentioned about the measures being taken by the government to ease liquidity in the financial markets and attract more investment in the economy.

She said that the Union Budget has laid huge emphasis on investment and consumption to realise the dream of 'New India' and making it a USD 5 trillion economy in the next few years.

Speaking about how the government intends to mobilise funds, the FM said that the Union Budget relies heavily on private investment to build infrastructure that would cost Rs 100 lakh crore over the next five years, rev up manufacturing, boost exports and create more jobs.

The budget proposes to further open various sectors for FDI and relax rules for other foreign and NRI investments into the country, she said.

The Union Budget has proposed to mobilise funds by offering to divest stake in more public sector companies and issuing sovereign bonds overseas. For finding ways to provide long-term financing to the infrastructure sector, the Finance Minister said adding that she has proposed an expert panel for suggestions.

In line with recommendations made in the Economic Survey, the FM stressed on the private sector-led investment, jobs, exports and consumption.

Besides proposing to relax various rules for foreign and NRI investment into the country, Sitharaman also talked about her idea to create a `Social Stock Exchange` for listing social enterprises and voluntary organisations. The move is expected to help social firms raise funds and promote governance.

The Budget has proposed opening FDI in aviation, insurance intermediary, animation and media. Sitharaman said that FDI inflows into India have remained robust despite global headwinds.

Further, the Union Budget has attempted to keep the consumption level robust by taking a much-needed step to tackle crisis in the shadow banking sector. The Union Budget 2019-20 proposed that government will give one-time six-month credit guarantee for the purchase of assets of high rated NBFCs up to 1 lakh crore. The move is set to ensure flow of capital for well-performing NBFCs.

In order to boost credit, the Finance Minister said that the govt has proposed to provide Rs 70,000 crore to public sector banks.

In a major tax relief for companies with an annual turnover of up to Rs 400 crore, the govt has proposed to lower corporate tax for them to 25 per cent from 30 per cent now,  the FM reiterated. She further informed that the start-ups and their investors who file requisite declarations and provide information in their returns will not be subjected to any kind of scrutiny in respect of valuations of share premiums.

The housing sector, one of the key job creators, also stands to gain from the Budget, the FM said. She informed that additional deduction up to Rs 1.5 lakhs for interest paid on loans borrowed up to March 31, 2020, for purchase of house valued up to Rs 45 lakh. This will result in the overall benefit of around Rs 7 lakh over a loan period of 15 years.

The Budget has proposed to upgrade 125,000 km of rural roads and 'Housing for All' under PMGSY-III in 5 years with an outlay of more than 80,000 crore providing impetus to the rural economy, she said.