The data on wholesale or headline inflation, gauged by the Wholesale Price Index, was released a day after separate data showed consumer inflation came in at 7.35 per cent last month. 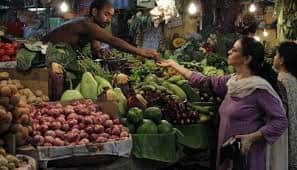 New Delhi: Wholesale inflation rose to 2.59 per cent in December, as against 0.58 per cent in November due to increase in prices of food articles, according to the government data released on Tuesday (January 14).

The Ministry of Commerce and Industry statement said, "the annual rate of inflation, based on monthly WPI, stood at 2.59% (provisional) for the month of December 2019 (over December 2018) as compared to 0.58% (provisional) for the previous month and 3.46% during the corresponding month of the previous year. Build up inflation rate in the financial year so far was 2.42% compared to a build-up rate of 2.92% in the corresponding period of the previous year."

The data on wholesale or headline inflation, gauged by the Wholesale Price Index, was released a day after separate data showed consumer inflation came in at 7.35 per cent last month, the worst reading recorded since August 2014.

Notably, the retail inflation rose to 7.35 per cent in December 2019 compared to 5.54 per cent in the previous month, according to government data released on Monday. The last month`s food inflation was 14.12 per cent as compared to 10.01 per cent in November last year, National Statistical Office data showed.

The data showed retail inflation was at over five-year high mainly due to the rise in the price of vegetables. The rise in inflation in vegetables was 60.5 per cent, pulses and products 15.44 per cent and meat and fish was 9.57 per cent.

Indian economy is struggling against the slowest pace of expansion in more than six years, due to weak consumption and thousands of job cuts amid weakness across sectors.

The government has forecast a GDP growth rate of 5 per cent for the economy in the financial year ending in March 2020, which marks the slowest pace of expansion in 11 years.