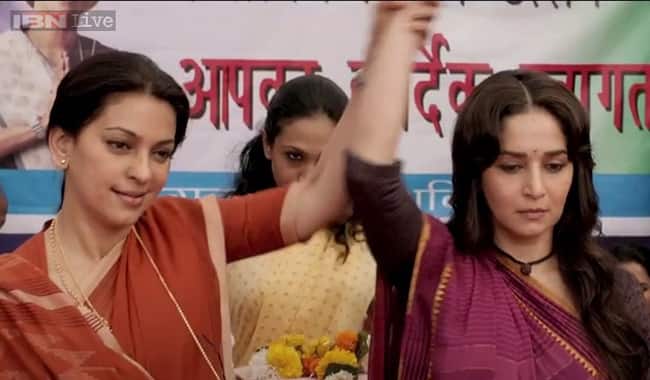 Mumbai: The world shall celebrate International Women’s Day on 8th March and ‘Gulaab Gang’ could be a perfect treat to celebrate womanhood. The Soumik Sen film is all about woman power.

With contemporaries of the 1990s - Madhuri Dixit and Juhi Chawla - on board a film together for the first time, one can only expect performances worth thunderous applause. We have often seen Madhuri play fiery roles but it`s Juhi Chawla’s performance that will leave you in a state of complete disbelief - as her villainous role in the film is unbecoming of her otherwise onscreen persona. The bubbly actress, who stole a million hearts with her infectious smile, will send shivers down your spine as she essays the role of a power hungry, mean and oppressor politician - Sumitra.

‘Gulaab Gang’ is Rajjo’s (Madhuri Dixit) gang of women clad in pink sarees that are symbolic of their femininity enveloped with the power to defeat chivalry.

The story revolves around Rajjo, the Messiah of Madhavpur, who turns thick-skinned after being tormented by her step-mother since childhood. She is truly fearless and empowers needy women by helping them find means of livelihood. She makes them self-reliant and also trains them in self-defence. In totality, Rajjo is what any woman would need at this hour, where crime against women is multiplying at an enormous speed.

The film has its own share of drawbacks. The story celebrates womanhood, but the film could have been a lot better. Sen could have avoided the naach-gaana had he really intended to create a stronger impact. Such filmi insertion dilutes the whole concept of serious cinema which otherwise has sensitive and thought-provoking content.

Sumitra, who is an exponent in playing politics, keeps asserting her allies to be careful before elections and not indulge in any wrongdoing that may cost them heavily. But her tryst with the machine gun in the end where she opens fire randomly at the gulaabi toli, contradicts her stance. That may confuse the audience and make them wonder why would somebody contesting elections even make the mistake of taking law in his or her own hand?

Minuses apart, the scenes between Madhuri and Juhi will make you truly wish to see them more often together, for they make a captivating duo on screen and have it in them to give the Khans a run for their money! The rest of the cast has pulled off superb performances and have put faces to characters that epitomise strength, courage, fearlessness and faith in womanhood.

The film highlights relevant issues - rape, corruption, goondaism, red-tapism, vote-bank politics and several other pertinent matters of the present time. Thanks to the director for assembling all these concerning subjects, addressing them through his cinematic language and presenting to the world as ‘Gulaab Gang’.

The film’s opening animated sequence is extremely impressive. Bollywood can make more use of such rare presentations to give movie-goers a refreshing treat. The locales are realistic and take you on a virtual tour of rural India where things aren’t as bright and nice as we believe them to be. The dialogues are superb, especially the ones that Juhi delivers. And Juhi deserves a special mention for delivering them with utmost conviction and realism.

And thanks to the action masters for making us believe that even women could pull off stunt sequences on the Indian screen. Women clad in pink sarees pull off some really good action in the film.

Overall, ‘Gulaab Gang’ may not be a typical film meant to taste success at the Box Office. The film does speak about issues that need urgent attention, but may not be enough to draw people to the theatres. But Juhi Chawla’s performance in the film isn’t worth a miss. So watch it for her.