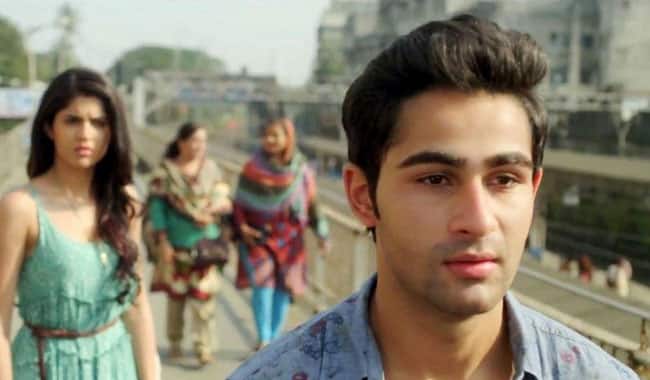 `Lekar Hum Deewana Dil` marks the grand entry of Raj Kapoor`s grandson Armaan Jain and popular South Indian actress, Deeksha Seth. Armaan has a whole family name he needs to live up to. Ranbir Kapoor, his cousin has already reached the top with appreciation coming from both fans and critics. But unfortunately, the young Armaan seems to have made a bad choice for a debut and has a lot to learn before the audience takes him seriously.

Even though the trailer of the movie worked quite well, with the viewers being promised a sweet romantic drama, it has only proven to be a major disappointment. The movie borrows it`s name from the evergreen song `Lekar Hum Deewana Dil` from `Yaadon Ki Baarat`, but that`s about it. But the title is not justified in the movie in anyway, and that is just the beginning.

Dino (Armaan) is a happy-go-lucky college going guy and his best friend, Karishma ( Deeksha), are a perfect couple in the eyes of their friends. Dino loves to pamper Karishma and teaches her to live her life her own way.

Over a couple of beers, the two decide that they should get married. So, to escape parental pressures, both Dino and Karishma pack their bags, and decide to elope. And guess how they manage to run away? They pile all their luggage on nothing but a two-wheeler and speed away happily singing and dancing.

So they embark on their new journey, kissing and professing their new found love for each other moving from city to city, dodging their family who are looking for them. Both are college going students, with no money and jobs but they manage to move from Goa to Nagpur to Raipur, all on Dino`s bike. Once married the two realise the difficulties of real life. A message that has been done to death in Bollywood. Remember Shah Rukh and Rani in `Chalte Chalte`? The elopement theory is a tad bit overdone and has nothing fresh to offer.

Arif Ali`s debut is nothing short of a huge letdown. He has borrowed from his elder brother Imtiaz Ali`s movies. It is a shame that Arif did want to break away from his brothers mould and show originality. You can relate to quite a few scenes from `Highway`, `Rockstar` and `Socha Na Tha`. The director could have done much justice to the débutantes except that he was just focussing on an average romance flick and no quality that Imtiaz has dazzled movie goers with.

Armaan fails to show any streak of genius or spark of acting like his cousin Ranbir Kapoor or Kareena. Even in the emotional scenes he does not strike a chord. The screenplay goes completely haywire, even before the intermission. The chemistry between Deeksha and Armaan falls flat. And even the kiss between the two is err... sloppy. Deeksha is a surprise in the movie and is quite good. Even though she had said in an interview that Armaan would hog the limelight, this movie might be a chance for Deeksha to make a firm footing in Bollywood.

There are a number of small screen actors in the movie but they don`t really leave a mark. When the movie ends it leaves you slightly frustrated because the lead just look kiddish and the director made you sit through the entire movie without a real storyline.

The music given by the maestro AR Rahman also loses it`s charm in the plot. Rahman, who made a strong statement with `Highway` and some great background score, fails to impress the audience with `Lekar Hum...`

One cannot predict how the movie fares at the Box Office, but it is not a movie worth wasting money on as neither the storyline not the characters are entertaining. But watch the movie only if you have no other choice left this weekend.

Armaan Jain has a long way to go to be a commendable competition to his cousins, and Bollywood on the whole. With a slew of new comers who have charmed movie watchers in the last few years, probably a more challenging movie would help him prove his mettle.

`Ek Villain` rakes in Rs 77 crore in one week