Eye in the Sky movie review: A playfully tense film

'Eye in the Sky' movie review. 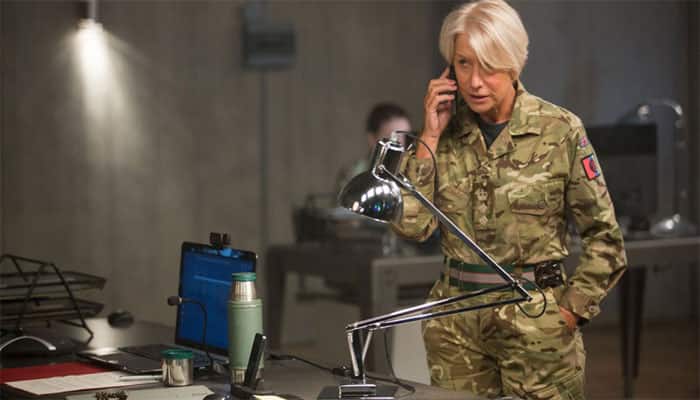 'Eye in the Sky' is an engrossing and provocative thriller that reveals; bureaucratic red-tapism and the moral dilemmas of those indulging in military warfare. It also explores the farce regarding the price of winning the propaganda war.

It dwells on the multi-nation efforts to fight terrorism, especially between the British, the US and Kenyan governments, who constantly calculate the risks and benefits of their respective military actions.

While the film is about drone warfare and its perils, what keeps you riveted to the screen is the urgency of decision-making and the dilly-dallying, non-commital and passing-the-buck attitude of the politicians.

This is a race-against-time film that shows how the scales of decision-making waver.

Colonel Katherine Powell, a hardcore British military officer in charge of Egret, an operation to capture a radicalised English woman Susan Danford and her husband Abdullah Al-Hady, is tipped that the duo would be in suburban Nairobi to meet some Al-Shabaab terrorist, who she has been pursuing for years.

But when the moment of capture arrives, Colonel Powell's plans abruptly change when the technologically-advanced spy camera -- a cyborg beetle -- reveals the devious plans of the terrorists. How she icily manipulates her way -- from "operation to capture" to "order to kill" situation -- forms the crux of the tale.

Helen Mirren as Colonel Powell, and often referred to as 'Mom' by her juniors, is at her fiery best. This is probably one of her best roles till date.

Alan Rickman as General Benson initially sounds buffoonish when he resignedly discusses dolls, but gradually he plays the sympathetic, caught-in-between note to perfection.

Aaron Paul as Steve Watts, the drone pilot based in Las Vegas, responsible for shooting, is sensitive yet over-dramatic. His moral and psychic toll on pilots who engage in long-range warfare, killing people from a safe distance, seems false and pretentious.

Barkhad Abdi who had earlier featured in "Captain Phillips" leaves a compelling impression, playing a Somalian undercover agent with elan.

While the entire film pivots on an emotional note, it is Aisha Takow as the little girl Alia Mo'allim, who steals your heart. Her demeanour and the innocence in her eyes is what sets her apart.

In putting the whole legality of war against one singular military action, director Gavin Hood and scriptwriter Guy Hibbert successfully create a war movie that seems at once essential and distinctly individual.

But, while the motive is to capture the terrorist, the script does not show any preparedness regarding the same and also the absence of the Kenyan government's representative shows how lopsided the script is.

Visually, the film is compelling with Johnny Breedt's production designs, Mickey Kirsten's special effects and cinematographer Haris Zambarloukos's camera work, which include the spy camera footage which are put together by Megan Gill's razor-sharp edits.

Overall, the film, though tense, has a notably playful flavour.