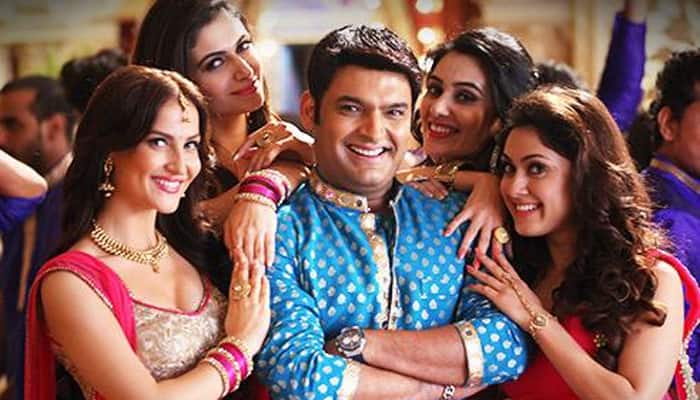 Best known for his comic timing and impeccable talent of tickling people’s funny bone – Kapil Sharma – has made his presence felt on the celluloid with his debut film - 'Kis Kisko Pyaar Karoon'- directed by Abbas-Mustan.

For anyone aspiring to be an actor, it would have certainly been a dream come true to be launched by a director duo, that has delivered blockbusters in the past. And in the film, Kapil gets to romance not one but four actresses!

Kumar Shiv Ram Kishan (Kapil Sharma aka SRK) is the lucky errr...the ‘unfortunate’ man on earth to get married to three women under three diverse yet helpless circumstances without actually having any inclination to enter matrimony with any of them. He is actually in love with his girlfriend Deepika (Elli Avram), the ultimate love of his life.

But the poor soul that he is, SRK can’t really fathom disclosing the truth about his three weddings either to his ladylove or to his three duly wed wives.

His lawyer friend Karan (Varun Sharma) is his emotional anchor and saviour, who manages to give bizarre yet scientific explanations to confuse people. He advices his friend SRK to buy apartments in the same building in three different floors to manage his three wives conveniently. And thanks to his long name - Shiv Ram Kishan  - helps him in maintaining three different identities until the inevitable happens one fine day!

Kapil as Kumar Shiv Ram Kishan is good but could have been better. We all know that he is the ultimate king of comedy, but enacting emotional scenes is certainly not his cup of tea! For instance, in a scene, he is seen explaining to his friend, his agony of having married thrice. But he fails to strike an emotional chord!

The ladies in the film – Manjari Phadnis as Juhi, Sai Lokur as Anjali and Simran Kaur Mundi as Simarn and Elli Avram – actually have very little to contribute! The only thing that keeps resonating in your ears is – “Aisa pati sabko mile” – a line that Juhi keeps saying every now and then.

We certainly expect more from an Abbas-Mustan film. Expectations have always been high, since we have seen the director duo deliver super-hits like ‘Baazigar’, ‘Soldier’, ‘Aitraaz’ and ‘Race’ to name a few.

There’s one instance that is worthy of being mentioned which is completely flawed. When Anjali, one of SRK’s 3 wives, invites her friends Juhi and Simran, on her birthday, SRK smears his face with a cake to go unnoticed by his other two wives. How can a woman not recognise her husband with a cake smeared face?

Nonetheless, there are some good moments too but sadly they are few! The theme of the wedding sequence towards the end will actually make you laugh! Based on contrived circumstances, this script is deeply flawed.

And if you think Kapil couldn’t have had a better start to his Bollywood career, then you are wrong. This powerhouse of talent could have indeed kickstarted his filmi journey in a much better way than this!