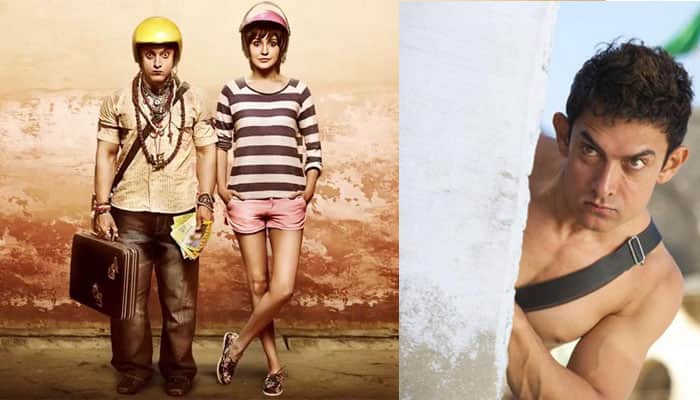 Rajkumar Hirani makes a splendid comeback! He hits it off with a bang in `PK`. Released at the end of the year, this Aamir Khan starrer is sure to take away all the brownie points.

No other movie could have been better than `PK` to release at such a time when our society is going through such upheavals.

The makers kept the plot in wraps, even though the movie was so much in news ever since the release of its first sensational poster. And now I know why it was such a good idea.

Be sure that only Aamir Khan can pull off such a brilliant script which is entertaining and sensitive at the same time. I wouldn't reveal much of the plot and spoil the fun because spoilers would ruin the experience of watching a story with a concept as brillliant as `PK`.

Known by only his initials, `PK,` is played by Aamir who has a curious take and view on the society. The transistor becomes his identity and he is not seen anywhere without it.

His innocent questions on the existence of God and to fathom the age-old rituals and blind belief on the system often lands him in trouble. But that doesn't dampen his spirits to continue his quest for an invaluable possession that was stolen from him.

And in that journey, moving from town to town, fate brings him to Jagat Janani aka Jaggu (Anushka Sharma) who plays a sassy journalist in the movie.

`PK`, as the society calls him, makes Jaggu his confidante and reveals his secret that he has hidden from the rest. Jaggu, who's trying to move on from a recent heartbreak, starts bonding well with him because of his honesty, quirkiness and innocence.

Learning about his story, Jaggu decides to free his precious property from the clutches of `Godman` Saurabh Shukla. The mannerism and the way in which the duo takes a dig on various self proclaimed godmen in the society and the dark age-old beliefs that blindfolds us is exhilarating.

The importance of the transistor is revealed in the end and its purpose too. The build to the climax is worth the watch.

With a concept as immense as `PK`, the filmmakers have done complete justice to the two and half hours of the story. I am not being biased when I praise Mr Perfectionist Khan. Because without a trace of doubt he has just won the hearts of one and all.

A satire on the political beliefs, religion, superstitions, the rigid mindset of our society and much more. Rajkumar Hirani has tried to bring out the sensitivity of various issues with extreme care through the characters. And each one played his role to the `T`. Be it the Rajasthani friend Sanjay Dutt as Bhairon Singh, the hyper boss Boman Irani, or the lover boy Sushant Singh Rajput as Sarfaraz, their role is not without a purpose. Sushant's short screen time leaves you slightly unsatisfied, wishing we could see him more. Aamir is seen in different avatars which manages to leave the entire crowd in splits.

While Anushka-Sushant's romance is short and crisp, the bond that Aamir-Anushka share is beyond magical. And if you think the storyline is on the similar lines as Akshay Kumar-Paresh Rawal starrer `Oh My God`, you have been misled. It has a lot more to its story than that.

The movie indeed is a combination of entertainment, humour, glamour, wit and perfect comic relief with a message that is shown throughout the movie. It is bound to compel you to ponder and question certain myths prevalent even today.

`PK` has enough substance to keep you hooked to your seats for the entire run time. If you find your attention wavering in the first half, the second half of the movie will put your doubts to rest. The story only gets interesting and picks up pace towards the end.

The viewers were constantly whistling at Aamir's funny one-liners and the crispy Bhojpuri dialogues. By the end, there were more thunderous claps and whistles--speaking volumes about the content.

There is a big surprise at the end – a special appearance by Ranbir Kapoor. But in which avatar and how? Watch to find out.

Directed by Rajkumar Hirani and produced by Vidhu Vinod Chopra in association with Siddharth Roy Kapur, `PK` is sure to surpass the top grossers of 2014.

For Aamir's exceptional act and the brilliant storyline, it's a 4.5 stars!