'Rock On 2' is a musical journey with hits and misses. The nostalgia factor here takes it a notch up on our entertainment scale. If you were impressed with the spirit of 'Magik' in 'Rock On!!' then 'Rock On 2' will prove to be an effective outing for you this weekend. 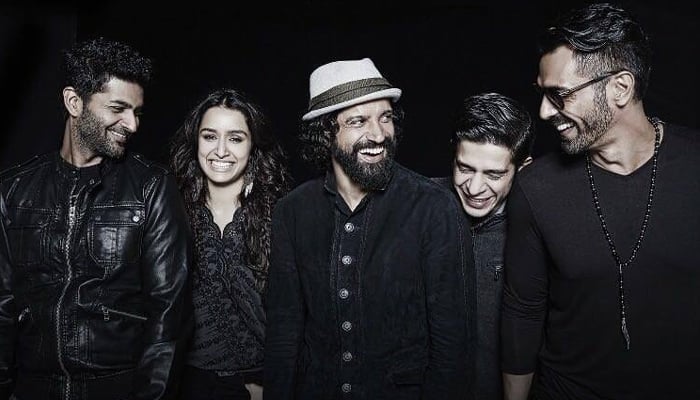 In 2008, 'Rock On!!' came as a surprise to the Bollywood lovers. It not only impressed the audiences with its power packed songs and 'new-age viewers' approach but also set the stakes high for upcoming musical releases. Bollywood actors -  Shraddha Kapoor and Farhan Akhtar – starrer 'Rock On 2' takes that epic journey forward.

The story revolves around former rock band 'Magik' member Aditya Shroff (Farhan Akhtar), Joseph 'Joe' Mascarenhas (Arjun Rampal) and Kedar Zaveri (Purab Kohli) who seem to be entangled in their respective personal issues. The trio apparently dissolved the band five years back due to a tragic incident which they hold themselves responsible for.

While Adi has moved to north-eastern part of India to help the farmers, Joe and Adi are somehow in touch with the new-age music scene but still unable to quench their creative thirst. This is when they bump into music enthusiasts - Jiah Sharma (Shraddha Kapoor) and Uday (Shashank Arora) – who inspire the former 'Magik' member to reunite.

But, wait! Success doesn’t come easy. In the path to glory, they encounter umpteen professional and personal troubles.

'Rock On 2' takes time to build its characters and their story-line in the first half. Once the pace is set, the screenplay turns out to be more gripping and interesting. The flick also flaunts heavenly north-eastern beauty. The cinematography and locations of the movie will definitely make you pack your bags and head towards Meghalaya and Shillong. It also highlights the plight of the farmers and how they get ignored by ruthless officials.

The most important thing that needs to be kept in mind while watching 'Rock On 2' is the spirit of music and how it unites the individuals. Here, director Shujaat Saudagar has interpreted the power of music in a way you can personally relate to.

Shankar-Ehsaan-Loy's music is exceptional. The lyrics used in 'Rock On 2' present a realistic take on life. Whether you are a rock music fan or not, these tracks will certainly attract you with their closer-to-life approach.

Arjun Rampal shines the brightest in terms of acting. His tough personality and hard baritone make him an ideal actor to play the role of a rockstar. Farhan is decent but the script doesn’t allow all its shades to spill. Purab's overacting turns out to be effective at times. as it was a demand of his on-screen character. Shraddha has been underused but the ending of 'Rock On 2' hints that we will get to see a lot of the 'Ek Villain' diva in upcoming sequels.

In between the quest to highlight multiple issues and personal stories, 'Rock On 2' tends to lose the momentum in between. However, it makes up with its hard-hitting climax that holds a lot of surprises for you. If you are a music lover then you will get to see a lot of other bands, apart from 'Magik'.

'Rock On 2' is a musical journey with hits and misses. The nostalgia factor here takes it a notch up on our entertainment scale. If you were impressed with the spirit of 'Magik' in 'Rock On!!' then 'Rock On 2' will prove to be an effective outing for you this weekend.